Tryouts for 'I'm Getting Murdered in the
Morning' Next Week; Show Set for Feb. 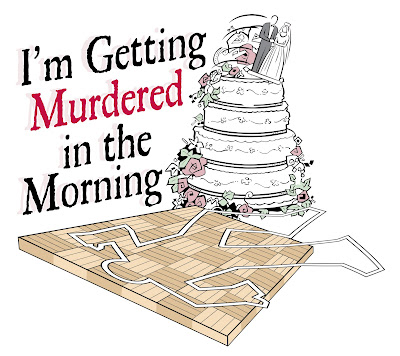 Tryouts for the murder mystery dinner theater “I’m Getting Murdered in the Morning” will be held Monday and Tuesday (Jan. 10 and 11) from 7 to 9 p.m. at Bradford Area Public Library.

Kristin Asinger will direct and produce the second show in Bradford Little Theatre’s “Out of the Box” season. Assistant directors will be Tim Asinger for improvisation work and Kathy Bryant, performance.

Performances will be Feb. 25-27 at St. Bernard Educational and Social Hall on East Corydon Street.

The performance includes audience participation and some improvisation, though Asinger stressed that no experience with improvisation is necessary.

“We are looking for 14 people who can play together, as well as work together. There are roles for both men and women from late teens to their 70s, and both experienced performers and first-timers,” said the BLT board member. Also, Asinger is looking for cast members to play a wedding photographer, disc jockey and people who would help serve the buffet dinner to the audience.

“Some parts have only a few lines to memorize,” she said, noting that she can arrange some alternate tryout times for people who are interested in performing but who cannot attend the auditions.

The play by Lee Mueller takes place at the wedding reception of Brenda and Eddie. This is the fourth wedding for Brenda, daughter of the wealthy Harold and Mildred Montague; when a mysterious man falls dead, “Bridezilla” is determined nothing will ruin her Special Day.

Roles in addition to the bride and groom include the bride’s wealthy parents; the mother of the groom; best man and maid of honor Benny and Bunny; Mary Burger, society columnist for the local newspaper; along with a “spin doctor,” disc jockey and others.

The audience will be served a full meal, beverages and cake, just as at a real wedding reception, and will be able to quiz cast members.

The Asingers have directed and produced script in hand plays with Off the Wall Players in Fairview; they co-founded, direct and produce the Pitt Improvers troupe at the University of Pittsburgh at Bradford which has included appearances in Kiwanis Kapers annual variety show. Most recently, BLT board member Bryant appeared in “Grace and Glorie.” She has extensive backstage experience.

For more information, people may contact any of the directing staff; visit www.bradfordlittletheatre.org or attend the pre-audition workshop on Saturday, Jan. 8, from 10 a.m. to 11 a.m. at the library.


This event will be part of Improv Month which also includes a Feb. 5 workshop by the Pitt Improvers to teach people improv exercises and games; “Beyond Funny” on Feb. 11, the Pitt Improvers’ third annual show which this year benefits three local non-profit groups; and “Fair and Unbalanced,” a performance by the famous Chicago comedy troupe, Second City, on Feb. 18 at the Bromeley Family Theater, part of the Pitt-Bradford’s Prism Series.

June 09, 2010
HARRISBURG -- The Department of Environmental Protection today ordered C.C. Forbes, of Washington, PA, to suspend all post-hydraulic fracturing activities on Marcellus Shale wells in the state immediately as it continues its investigation into a June 3 well blowout in Clearfield County.

DEP Secretary John Hanger said EOG Resources -- the company that owned the well in Lawrence Township -— hired C.C. Forbes as a contractor to provide post-hydrofracturing services at the site.

The company must also furnish the names of its employees who were working at the site or have knowledge of the equipment used there. The secretary said those employees must be made available to the department for questioning.