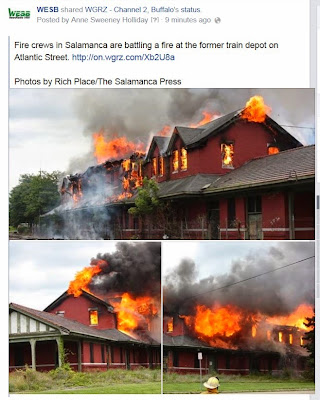 The fire that destroyed a historic Salamanca building this afternoon is being considered suspicious.

City fire Chief Nicholas Bocharski says they have received information that may lead them to someone who may have started the fire in the former Erie Rail Depot. He also said people have been in and out of the building within the last 24 hours.

Mayor Carmen Vecchiarella say the building was on the city’s demolition list and it probably would have been torn down within the next two or three months.

Investigators are still on the scene.

The news leader of the Twin Tiers ... since 1947
fire Salamanca

Anonymous said…
Probably Some "Bored" Youth Who Have "Nothing To Do" But Wanted Some "Action" in Salamanca.
Check Some Facebook Postings of the "Usual Suspects" Around The Area for "Selfies" & "Video" of the Brave & Dedicated Emergency Responders RISKING Their Lives for This "Fun" on a Lazy Afternoon in the City.
Sad & DANGEROUS!
"Book 'Em Danno" [Hawaii Five-O]
July 30, 2014 at 6:22 AM