December 16, 2014
Allegheny County buck ranks as No. 13 in archery category


The hunters who top Pennsylvania’s all-time list for largest bucks harvested will remain there a while longer.

The Pennsylvania Game Commission today took official measurements on an exceptionally large rack from a whitetail buck taken in Allegheny County two months ago, during the statewide archery season.

Many believed the buck held the potential to be a new state record, but the final score fell short of the leaders. 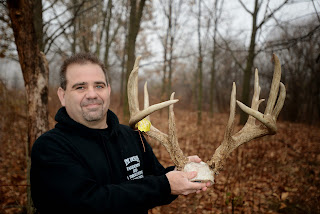 The typical 10-point buck taken with a crossbow Oct. 10 by Fayette County hunter Jeff Lenzi netted a score of 166 inches, based on Boone & Crockett Club standards for scoring big-game animals.

The score places the buck at No. 13 in the typical archery category in the Pennsylvania Big Game Records book.

The top buck in that category, taken in Allegheny County in 2004 by Michael Nicola Sr., of Waterford, scores 178 2/8 inches. The largest typical buck on record in Pennsylvania, taken in Bradford County by Fritz Janowsky, of Wellsburg, N.Y, way back in 1943, scores 189 inches. That buck tops the typical firearms category.

D’Angelo explained the scoring system rewards symmetrical racks and calls for deductions when a rack’s points are abnormal or points on one side of a rack that don’t exactly match the other side. Racks also will typically shrink over time.

A rack classified as typical cannot have many abnormal points. Lenzi’s buck had a gross score of 175 1/8 inches.

Game Commission Executive Director R. Matthew Hough congratulated Lenzi on his record-book buck, which is large enough to qualify for entry into the Boone & Crockett Club, as well as the state records program. While it doesn’t top the all-time list, the huge buck still is the trophy of a lifetime and a fine example of the caliber of deer Pennsylvania is capable of producing.

“Each year, we have hundreds of whitetail hunters enter the state record books, and many of the top bucks on record were taken in the last 10 years,” Hough said. “And any hunter is hard-pressed to match Jeff Lenzi’s feat.

“Lenzi’s buck is an extraordinary animal, and I’d like to congratulate him on his living out every Pennsylvania deer hunter’s dream,” Hough said.

The news leader of the Twin Tiers ... since 1947
deer Game Commission hunting