January 26, 2015
High school students interested in working with computers now have another reason to apply to the University of Pittsburgh at Bradford’s Computer Information Systems and Technology program: four new $5,000 freshman merit scholarships for CIS&T majors. 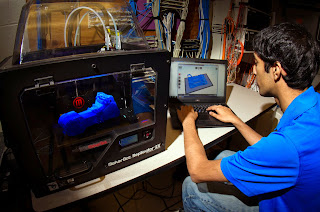 Two of the $5,000 scholarships were endowed by Dr. Richard E. and Ruth McDowell of Bradford, and two additional scholarships of equal size were matched by the university.

“Good academic programs have to have good students,” Richard McDowell, president emeritus of Pitt-Bradford, said of his and his wife’s decision to make a gift of more than $250,000 to endow the scholarships, which will be named in honor of Barbara and Lester Rice and Ruth McDowell’s parents, Alice and Thomas Moriarty.

Students receiving the scholarships (at least four will be awarded every year) will have to be high performers indeed. Minimum requirements are a 3.25 cumulative high school GPA in college-preparatory classes and SAT scores of 600 in math and 500 in verbal.

Established five years ago, the CIS&T program has grown quickly to 50 majors at the campus of 1,500 students and has an excellent graduate job-placement track record with starting salaries generally ranging from $45,000 to $55,000. Graduates also have excellent long-term career growth prospects, said Don Lewicki, program director.

The U.S. Department of Labor predicts a growth rate of more than 25 percent for computer systems analysts through 2022. Those jobs, department statistics say, had a median pay of $79,680 in 2012 and require a bachelor’s level education.

“We’re profoundly grateful to Dick and Ruth for their longstanding commitment to and support of our campus and its academic programs,” said Dr. Livingston Alexander, president of Pitt-Bradford. “We’re especially pleased that they are keenly focused on scholarships, a high priority on the campus.”

McDowell, who taught biology before becoming a college administrator, is impressed by the possibilities for students in the Pitt-Bradford program. Systems analysts design and maintain an organization’s information systems.

“My entire adult life, I’ve been reading Science magazine, and there’s always been a lot of concern about fewer people entering the sciences,” he said. McDowell said he wanted to make a gift to encourage more students to enter the realm of science, technology, engineering and mathematics.

His eye fell on the fast-growing CIS&T program, led by Lewicki. “The faculty and staff in the program are top-rate people,” McDowell said. “Why not build on what we have?”

Rice is the chairman emeritus and former CEO of KOA Speer Electronics, the successor to AircoSpeer, and a supporter of the university.

Rice began his career in electronics with the U.S. Navy, where he attended Electronics Technical School. Later, he earned a Bachelor of Science degree in electronics engineering from the University of Michigan.

Thomas Moriarty was an electrician who worked for many years at AircoSpeer maintaining its electrical systems. Students interested in the CIS&T program should contact Alexander Nazemetz, director of admissions, at nazemetz@pitt.edu or 814-362-7555.