An Emporium teenager was hurt in a one-vehicle crash Friday afternoon on Route 120 just west of Sunny Lane Road.

Police say an SUV driven by 18-year-old Kasandra Karsten left the road, hit some mailboxes, hit a guiderail, then traveled over the guiderail and went down an 8-foot embankment.

Karsten was taken to Altoona Hospital for treatment of unspecified injuries. 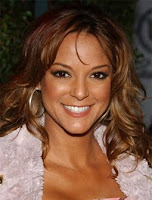 As a fan of "All My Children" from the first day (literally) I was thrilled to speak with "Dr. Maria Santos" -- Eva La Rue, who most of you probably also know from "CSI: Miami."

She has some great beauty tips for busy women. We also chatted a little about AMC.


I also spoke with Eila Mell, author of "New York Fashion Week: The Designers, The Models, The Fashions of the Bryant Park Era." Listen here.

Find out more about Eila and the book at EilaMell.com.

The SPCA's Woofstock event scheduled for today has been postponed until next week due to weather. 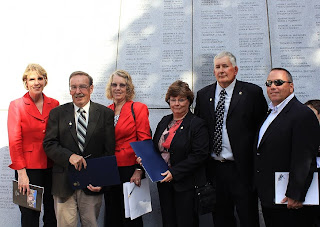 On Tuesday, Jeff, who is a Deputy County Administrator for Cattaraugus County, his wife Susan, siblings, Deborah and John, and their special guest, Senator Catharine Young (R,C,I – Olean), joined a crowd of hundreds at this year’s Fallen Firefighters Memorial Wall induction ceremony in Albany to honor nine brave firemen who lost their lives in the line of duty.

Jeff’s late grandfather, Charles H. VanDeCar, is now among the heroes whose names are etched into the memorial wall to forever be officially remembered for his service.

“Our grandfather Charles died in 1922 as a result of a tragic fire in the City of Troy, New York. Charles was a father, grandfather and a great grandfather to a family who never knew him. On this special day he finally w…
Post a Comment
Read more

Getting Tough on China 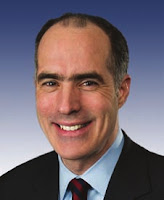 By BOB CASEY
US Senator

I joined a bipartisan group of senators to introduce legislation that will crack down on China’s currency manipulation. This week, the Senate passed the legislation by a bipartisan margin of 63-35. By confronting China on its currency cheating, we will create jobs in the United States.

China has kept its currency – the yuan – artificially low for years to make it easier to export their products to the United States and other parts of the world. The result is a massive and growing U.S. trade deficit with China that is costing our country millions of jobs.

A report from the Economic Policy Institute (EPI) finds that the U.S. trade deficit with China has resulted in the loss of 2.8 million jobs over the past decade (2001-2010), including almost 107,000 jobs in Pennsylvania. 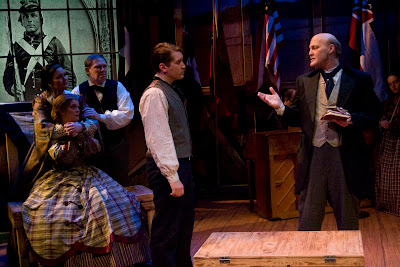 “Civil War Voices,” a musical based on the diary of a Civil War soldier, will be the first offering in the University of Pittsburgh at Bradford’s Prism series.

The university’s premier arts series will open the season with the return of The Barter Theatre in its performance of the period musical at 7:30 p.m. on Oct. 25 in the Bromeley Family Theater in Blaisdell Hall.

James R. Harris based his musical on the diaries and other writings of his great-great-uncle, a young couple separated by the war, a young professor who became a lieutenant, and a freed slave working as Mary Todd Lincoln’s dressmaker. The music arrangements by Mark Hayes include period songs such as “Dixie,” “The Yellow Rose of Texas” and “Battle Hymn of the Republic.”

Assistant Director Katy Brown explains, “The really beautiful thing is, by the end of the play, we see that even though it was North vs…
Post a Comment
Read more

An Olean man was attacked and stabbed last night while walking on railroad tracks in Westons Mills.

Sheriff’s deputies say 27-year-old Shawn Wright was walking toward Olean when he was attacked from behind, stabbed in the neck with a knife and robbed of his personal belongings.

He was taken to ECMC for treatment of his injuries. The Sheriff’s Office is continuing its investigation.

Drought watches have been lifted in McKean, Cameron, Elk, and Potter counties. The Pennsylvania Drought Task Force used reports and forecasts from the National Weather Service in conjunction with DEP’s drought monitoring program to make the recommendation today.

On Sept. 2, DEP lifted drought declarations for 40 counties in the eastern and southern parts of the state. At that time, four northern counties had not recovered sufficiently and were kept in drought watch because the 90-day precipitation deficits were as great as four inches.

Two road crew workers were hurt when a driver got too close to them in an active work zone and hit them with the side mirror of her car.

State police say 42-year-old Kevin Harris of Phillipsburg and 37-year-old Larry Joiner of Reynoldsville were part of a crew paving the new bridge north of Liberty Metals in Fox Township this afternoon when 58-year-old Betty Taylor of Kersey crossed the center line and hit them.

Preschool Students Learn to
Be ‘Fire Smart from the Start’ 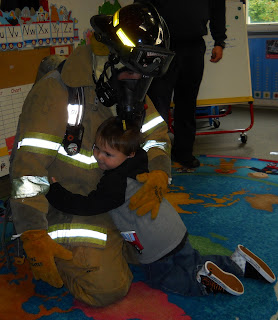 Students at Rainbow Corner Preschool learned how to be “Fire Smart from the Start” on Thursday.

The Bradford City Fire department made their annual visit to the preschool during Fire Safety and Prevention Month to show students what a firefighter looks like fully dressed in gear, what to do in case of a fire, and how to stop, drop and roll.

Students were also given tours of a fire truck and ambulance.

According to Safe Kids USA approximately 488 children ages 14 and under die in residential fires each year and an average of 116,600 children are injured from a fire/burn-related incident.

“It’s never too early to start teaching children about fire safety,” said Kimberly Engstrom, Rainbow Corner Preschool Director. “There is a difference between scaring students and making them aware of how to be safe.”

U.S. Senator Bob Casey (D-PA), Chairman of the Senate Foreign Relations Subcommittee on Near Eastern and South and Central Asian Affairs, released the following statement after the U.S. Department of Justice announced charges against two men in a plot to assassinate the Saudi Ambassador to the United States:

“The allegations in the criminal complaint are shocking. I would like to thank our law enforcement, intelligence agencies and the Mexican government for their efforts to foil the alleged Iranian plot to kill the Saudi Ambassador to the United States. I support the Treasury Department’s sanctions on five individuals associated with this alleged plot.

“Such an attack could have resulted in scores of American casualties. This incident shows that the Iranian Islamic Revolutionary Guard Corps (IRGC) ‘Qods’ force intends to continue extending its influence abroad. Through my oversight position on the Foreign Relations Committee, I have examined the efforts of the Iranian regime to sup…
Post a Comment
Read more 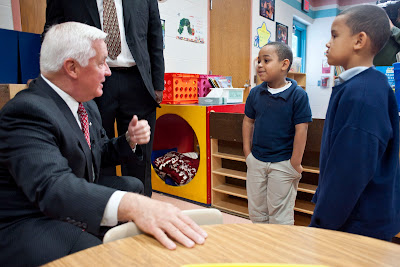 The American Federation for Children—the nation’s voice for school choice—praised the governor, State House Majority Leader Mike Turzai, Senate Majority Whip Pat Browne, and Secretary of Education Ronald Tomalis for supporting a legislative package that is poised to significantly improve the educational futures of thousands of Keystone State students beginning as early as next year.

Corbett’s plan—which he said he hopes to see passed into law this fall—would create an Opportunity Scholarship Program that would grant scholarships to low-income students living in the state’s lowest performing 5 percent of schools. Families with incomes up to 130 …
Post a Comment
Read more 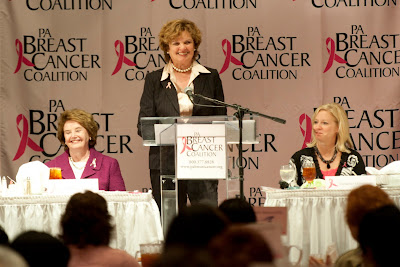 October 11, 2011
A Bradford man accused stabbing another man multiple times in an incident last month on Tibbitts Avenue has waived his preliminary hearing in front of District Judge Dominic Cercone.

25-year-old Randon Black is charged with attempted criminal homicide, aggravated assault and related offenses after allegedly stabbing David Kelsey and cutting his throat and neck with a black-handled K-Bar knife.

Black is in McKean County Jail. Because of the seriousness of the charges, no bail has been set.
Post a Comment
Read more

October 11, 2011
A Hinsdale man is dead following an ATV accident over the weekend.

68-year-old Claude Smith was unconscious when emergency crews arrived at Flanigan Hill Road accident site. He was taken by ambulance to Olean General Hospital, where he was pronounced dead about half an hour later.

Sheriff’s deputies say Smith’s ATV went out of control and flipped over. The investigation is continuing.
Post a Comment
Read more

October 11, 2011
I-86 between Salamanca and Allegany State Park was closed for several hours earlier today after three cars collided head-on.

Investigators say 73-year-old John Cousins of Olean was disoriented and traveling the wrong way on the interstate when his car hit two others near Salamanca.

Cousins was taken to Olean General Hospital with serious, but not life threatening, injuries.

28-year-old Jessie Fuller of Little Valley was taken to Olean General for treatment of unspecified injuries. The third driver, Robert Rafferty Jr. of Kokomo, Indiana, was not hurt. 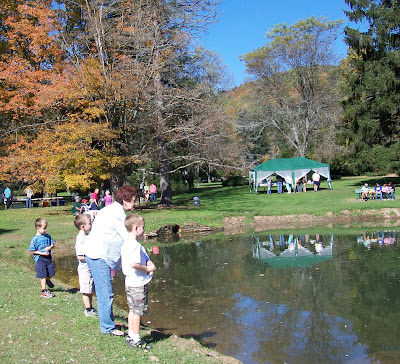 Congratulations to Steve Cavallaro and everyone involved in restoring the Willow Dale Duck Pond -- and making it better than ever. Sunday's fundraiser brought in more than $5,800. You can still contribute to the effort by sending a donation to "Friends of Willow Dale" c/o CNB Bank.