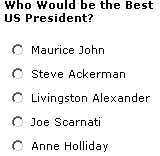 Feel free to leave comments ... you can do it anonymously.

I put myself into an interesting competition here. Mo John is already president of a nation so, obviously, he's got experience. Dr. Alexander is president of a successful university (and getting more successful by the minute!). Senator Scarnati is president pro tempore of the PA senate so he's got government experience, too. Steve Ackerman is Bradford's beloved football coach but I needed to put another homegrown candidate in the mix so I wouldn't have an unfair advantage with the hometown voters.

So why vote for Anne Holliday? Although I've never been elected to a government position, I have reported on local and state government for about 10 years. Any reporter will tell you that you really have to know your subject if you want to do a good job. (One of my opponents in this poll -- Joe Scarnati -- did say -- and I quote -- "You know about state government, that's for sure." And that comes from the guy who holds the third-highest constitutional office in the Commonwealth.) I have held non-government elected office previously, however. I was a Woman's Council representative in college and in high school I was vice president of Pep Club and president of the Forensics League. I'm currently the vice president of Bradford Little Theatre. My current management position as news director at WESB/WBRR is not the first time I've been in management. I was the manager of the Interstate Parkway Crosby Mart and assistant manager at both the Bradford and Warren Perkins restaurants. I've also traveled to 4 countries, 26 of the 50 United States and Bermuda. I think that makes me highly qualifed.
station stuff

Anonymous said…
If this is supposed to be funny, it's not. This is one of the most crucial points in American history and the upcoming election should be taken seriously. I normally don't quote anything from Senator Hilary Clinton but this time she made sense when she said nothing less than the future of our children hangs in the balance. Obviously, you are just another member of the liberal media taking a cheap shot at Sarah Palin who WILL be our next vice president.
September 6, 2008 at 12:46 PM

Solomon's words for the wise said…
Anne,
If you do anywhere near as good a job as President as you do with your news job, we can look forward to an awesome 8 years ahead. You have my vote!!
September 6, 2008 at 2:07 PM