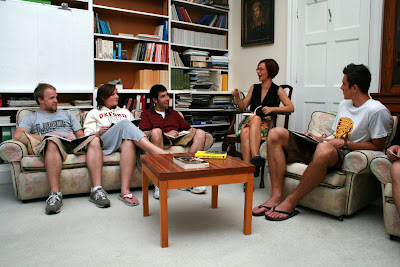 Program director Br. Basil Valente, O.F.M., began the search for new academic possibilities at Oxford nearly four years ago. His focus led him to Trinity College. Why make the move from Somerville College, home of the program for years, to Trinity? According to Valente, Trinity College went out of its way.

Valente made the decision to switch locations last summer during the Francis E. Kelley Oxford program’s 20th anniversary. Sr. Margaret Carney, O.S.F., S.T.D., President of St. Bonaventure, and the Board of Trustees helped during the transition. This summer, the 27 St. Bonaventure students joined those from schools such as Georgetown, the University of Massachusetts at Amherst, and the University of Georgia, Valente said.

Tim Condello, a senior sociology major, experienced the change, participating in the program for the past two years. He recently served as the Oxford student assistant for St. Bonaventure’s campus. Condello hopes to participate again in summer 2009.

“It’s older and more prestigious,” Condello said of Trinity. “It offers a much better cultural environment.”

“We were given a variety of learning venues,” Valente said.

Although the central location of the program changed, classes and events remained true to the tradition of a summer in Oxford. During the six-week long program that runs July and August, St. Bonaventure students take either two or three classes that have an emphasis on British lifestyle and culture. A class comprises seven or more students and their tutor in an intimate, seminar-style setting. However, a number of these classroom settings appear more like a living room area than a classroom at Bonaventure. Grades are based on the papers and tests assigned by individual tutors, and then transferred to each student’s transcripts.

Condello chose to partake in British and American Media and Culture as well as International Business (Marketing).

Anne Dlugosz, a senior and philosophy major, spent her first time in Oxford studying Shakespeare and literature. She also tackled the “Natty World” class, what Bonaventure students call Inquiry in the Natural World.

“I enjoyed both classes and had somewhat of a science background,” Dlugosz said. “I was one of the few people who took biology before.” She credits this past knowledge to earning some of the highest grades in the program.

In addition to classes, students live on the Oxford campus and have the opportunity to attend high tea, non-credit based lectures, formal banquets and group events. Day trips to London, the Globe Theatre, Stonehenge, Oxford and Windsor castles, outdoor Shakespeare performances such as “A Midsummer Night’s Dream,” and a tour of Buckingham Palace added to the cultural experience.

“There is also a certain block of time you can go to another country,” Condello said. He chose Paris, France. Other students this past summer chose to travel to Munich, Germany; Vienna, Austria; Galway, Ireland; and Prague, Czech Republic, during their four-day weekend of personal travel.

“I went to Munich with six other people,” Dlugosz said, “and it was amazing.” They had two full days to explore. She and a friend also went to the Bavarian region and saw the Alps.

Another positive change in the program was an addition to Valente’s directorial staff, counselor Cathi Beatty. As associate director alongside Fr. Daniel Dwyer, O.F.M., Beatty acted as a resource for students.

“Br. Basil thought it was a good idea to have a counselor on the directorial staff,” Beatty said.

Students sat down with Beatty for personal interviews last semester. She was then able to pinpoint and address the issues that individual students were facing and may possibly face during their time abroad. Beatty put together a booklet for students, meeting with the group beforehand, and was available in Oxford. She describes her involvement in the summer 2008 session as a positive, proactive step.

The summer 2009 schedule has been set, and Trinity College will again be home to the program’s students. For an application or more information on the 2009 Francis E. Kelley Oxford program, visit http://oxford.sbu.edu or e-mail Valente at bvalente@sbu.edu, Beatty at mbeatty@sbu.edu, or Oxford student assistant Shannon Holfoth at holfotsm@sbu.edu.
St. Bonaventure