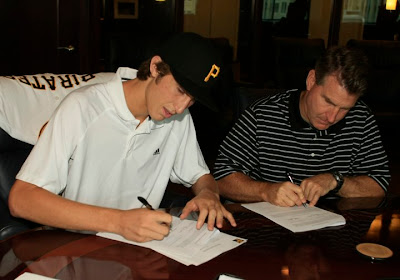 The Pittsburgh Pirates have signed right-handed pitcher Trent Stevenson, the clubs seventh round selection in the 2009 First Year Player Draft.

Stevenson went 7-2 with a 3.91 ERA this past season for Brophy Jesuit Prep School in Phoenix, Arizona. He pitched two complete games – one was a shutout – and had 59 strikeouts.

Fuesser went 5-2 with four saves and a 4.35 ERA in 19 games as a freshman at Walters State Community College in Morristown, Tennessee. He also recorded 60 strikeouts and limited opposing hitters to a .222 batting average.

The Pirates have signed 17 of their 51 selections from this year's draft.