US Senator Bob Casey says he wants rural northwestern Pennsylvania to get the money it needs to spur economic development and job growth.

“The worst thing we could do is have a recovery and get out of the hole, and move down the road … and then go back into the ditch because we didn't invest, we didn't build a strong foundation or we made other mistakes,” Casey told a panel of local leaders via video conference Monday morning at the University of Pittsburgh at Bradford.

Casey said the main focus of the gathering was to hear the concerns of local industries and governments, but he also wants to see “what’s in the pipeline now that we can move more quickly.”

He said that although Pennsylvania's unemployment rate is improving "numbers don't mean a heck of a lot to real people."

It doesn't matter to unemployed people in Pennsylvania that Michigan's jobless numbers are double what Pennsylvania's are, he said.

But a number he did point to was 5 million. He said that, over a two-year time period, a good job creation tax credit could create that many jobs.

He noted that people are coming in from Texas and Oklahoma to take Marcellus Shale drilling jobs.

Alexander said he believes that universities are in unique positions to help people get back into the workforce and should be called upon to do that, with financial help from the government.

"It immediately gets workers trained and back into the workforce," he said.

On a related note, American Refining President and COO Harvey Golubock pointed out that ARG is working with both Pitt-Bradford and the Bradford Area School District on petroleum technology programs.

“It’s extremely important that we train our citizens,” Golubock said. “There’s tremendous opportunity in these industries.”

He also said that he thinks some federal money that’s being geared toward alternative energy sources should be channeled toward traditional energy businesses because “that’s where the jobs are now.”

Golubock also noted that the recently lifted moratorium on drilling in the Allegheny National Forest cost this region “a significant amount of jobs.” 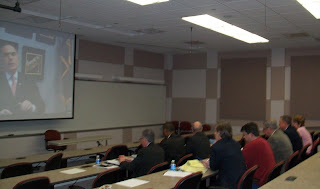 Sue Swanson of the Allegheny Hardwood Utilization Group (AHUG) added that the ANF is “critical to our resource basket.”

The region’s economy is tied to the forest, she said.

Cheryl Banco of Warren County represented the dairy industry and said Pennsylvania will probably lose more than 300 farms this year because dairy farmers have not been fairly paid, or helped during the economic downturn.

She did point out that the federal government will be sending out emergency money to farmers next week.

The discussion also hit on more and better ways to get the money to rural areas to attract more business and industry.

County Commissioner Joe DeMott said that larger counties and municipalities are able to respond more quickly, and get a quicker response from the government when it comes to attracting industries.

He pointed to the regional fiber optic system, the idea for which was born in 2008, and is now up and running thanks to a public/private partnership of sorts.

He said the project to expand the network to the larger region – 13 or 14 counties – is taking longer because of the bureaucratic red tape that's involved.

He said that when the idea of the fiber optic network arose, the people behind it were told by national and international companies that it's more economical for them to invest in one block in Pittsburgh or Philadelphia than an entire county in northwestern Pennsylvania.

He said the same problem exists with traditional infrastructure.

"Four-lane highways are just as critical to the economy now as they were when the interstate system was extended almost 50 years ago," he said, adding that the region has two east/west interstates – 80 and 86 – but not a north/south interstate highway.

"We do not have a four-lane highway coming through this area and that affects us significantly on attracting businesses (and) on our local businesses being economically competitive," Glesk said.

Glesk said another critical element is airports, noting that the Bradford and DuBois airports are under the Essential Air Service subsidy program, which he said is "outmoded."

He noted that when Bradford's flights were going to Washington, DC, emplanements tripled. Since EAS switched Bradford from Washington to Cleveland, emplanements are down by two-thirds.

"Cleveland is not where we need to go,” Glesk said, adding that the EAS system does not fairly serve rural airports across the county.

Toward the end of the meeting, Casey pointed to statistics showing that McKean, Cameron, Elk, Cameron, Potter and Warren counties are well below the state average when it comes to the number of people with bachelor's degrees.

Alexander said the statistics don't tell the whole story. He said plenty of people in the region are earning bachelor's degrees – then they're moving out of the area because there are no jobs.

Casey also said he’s not apologetic about going after Congressionally directed money -- earmarks. He said it’s going to go somewhere; it might as well come to Pennsylvania.

He said during Senate debates on the appropriations bill and healthcare, other senators got up and specifically criticized Pennsylvania projects.

"I don't care. In fact, I want them to criticize it," he said. "That means it gets more attention."

"Call me whatever name you want," he said. "I'm going to pursue those dollars for communities in Pennsylvania with a ferocity and focus that people have a right to expect of me."

peter said…
I've plotted the latest BLS Unemployment data for Pennsylvania to create this heat map:
http://www.localetrends.com/st/pa-pennsylvania-unemployment.php?MAP_TYPE=curr_ue
December 22, 2009 at 9:31 AM