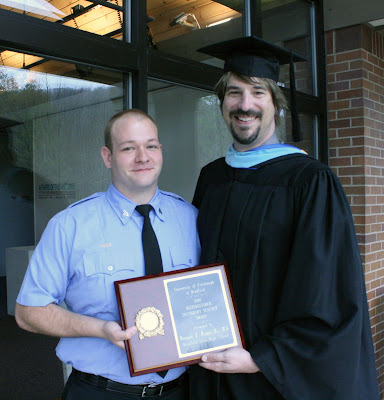 Bernie Picklo, a former science teacher at Bradford Area High School, has been honored as this year’s Distinguished Secondary Teacher by the University of Pittsburgh at Bradford.

The award is presented annually to a teacher who is willing to work with and challenge students both inside and outside of the traditional classroom. Members of the university’s senior class nominated the candidates.

Although he is currently the academic technology integrator for Pitt-Bradford, Picklo was nominated by Stephen Hale, a criminal justice major from Lewis Run who had Picklo as an earth and space science teacher at BAHS during his freshman year.

Hale credited Picklo with being an influence to turn around his own academic career.

“From day one, we never saw eye to eye, and I hated being in his class,” Hale wrote. “My friend and I used to sit there and look at racing magazines all class and make fun of Mr. Picklo. I eventually got to a point where I was trying to convince my parents that I wanted to drop out, and I didn’t want to go to school anymore.

“One day after class, Mr. Picklo had quite the talk with me. He told me how I reminded him of himself when he was that age. He told me how he saw so much potential in me; I just had to get the ambition to use it.

“After that talk, it made me think and realize that for once a teacher cared enough to show a student that they meant something and they were there to help. I went from a D to A’s and B’s and went on to finish high school making honors.”

Picklo’s colleagues in the science department at BAHS also wrote a letter in support of his nomination.

“What made Bernie an extraordinary educator was his willingness to gently push those around him to succeed to the best of their ability,” they wrote. “He expected the best from his students, and in most cases, he got it because he let them know that he cared about them and their futures.