PITTSBURGH – Steeler Country is now home to the Eagles! No, not the cross-Commonwealth rival Philadelphia Eagles; a pair of American bald eagles.

“While bald eagles are not an uncommon sight as they hunt for fish in the Three Rivers area of Pittsburgh, this is the first confirmed nesting pair of bald eagles in Allegheny County,” said Gary Fujak, Game Commission Wildlife Conservation Officer for western Allegheny County. “The nest is in Crescent Township, but – in order to protect the nest from disturbances – we are not going to disclose the exact location, and we are working with the landowner to keep the area secure.” 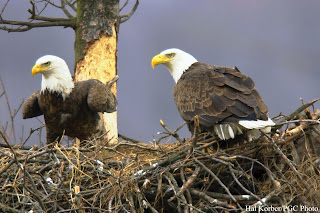 The Game Commission annually monitors bald eagle nests – both existing and new – to measure nesting population trends and nesting success. Monitoring helps the agency to continue to follow bald eagle’s recovery and let’s biologists know immediately if problems are occurring, both locally and statewide. Wildlife Conservation Officers protect nests and work with landowners to ensure the safety of bald eagles and their future success. When discovered, new nest sites are protected and reproduction is monitored.

“We encourage anyone who believes he or she saw a bald eagle nest to notify the Southwest Region Office,” Hough said. “In addition, we encourage wildlife viewers to enjoy viewing eagle nests from a distance to eliminate possible disturbances.

“Please remember that bald eagles receive federal protection under the Bald and Golden Eagle Protection Act and the Migratory Bird Treaty Act, which safeguard the birds and their nests from disturbances and destruction, and such acts carry heavy fines and penalties.”

The Game Commission’s management plan for bald eagles calls for more public education about eagles. An informed public guided by good “eagle etiquette” will be the best advocate for a continued bald eagle recovery and the best chance that any Pennsylvanian can see a bald eagle near his or her home in the future.

As recently as 1983, there were only three eagle nests remaining in Pennsylvania. That year, the Game Commission began a seven-year bald eagle restoration program in which the agency sent employees to Saskatchewan to obtain eaglets from wilderness nests. The Richard King Mellon Foundation of Pittsburgh and the federal Endangered Species Fund provided financial assistance for this effort. In all, 88 bald eaglets from Canada were released from sites at Dauphin County’s Haldeman Island and Pike County’s Shohola Falls.

Since 1983, Pennsylvania’s eagle nests have produced more than 1,200 eaglets, and the population has increased by about 15 percent annually. But, while this growth and expansion are to be celebrated, there has been some “crowding” reported in some areas.

“There’s still plenty of new or sparsely-used territory for nesting pairs in the Commonwealth,” said Doug Gross, Game Commission biologist. “Some of the best remaining eagle nesting habitat includes the Susquehanna’s north and west branches, the Monongahela River, the Youghiogheny River and the Lake Erie shoreline. There also are many large lakes and impoundments scattered across the state with more than adequate fisheries and no eagles.”

While the Game Commission currently classifies the bald eagle as a threatened species in Pennsylvania, they were removed from the federal Endangered Species Act by the U.S. Fish and Wildlife Service, in 2007, because delisting goals had been achieved.