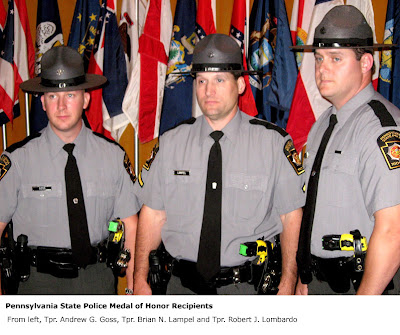 "Each of these troopers put his life on the line to protect the citizens of Pennsylvania," Pawlowski said. "They are courageous and dedicated individuals whose heroic actions reflect the high standards of the Pennsylvania State Police."

Lombardo and Miller were involved in a 40-mile pursuit of a man who threatened his estranged wife with a gun and abducted their son. The fleeing vehicle was brought to a stop in Coolbaugh Township, Monroe County. As troopers approached the car, shots were exchanged, with bullets striking Miller, Lombardo and the suspect. The suspect was killed, but his son was rescued unharmed from the car. Miller was flown from the scene to the Lehigh Valley Hospital, where he died of his wounds.

"Despite being shot himself, Tpr. Lombardo did not seek medical attention until he helped bring the incident to a close," Pawlowski said.

Goss responded to Route 6 in Conewago Township, Warren County, around 10:30 p.m. on Dec. 24, 2009, for a report of pickup truck being driven erratically. When he was notified that the pickup was traveling east in the westbound lanes, Goss activated the emergency lighting of his unmarked patrol car and passed a Jeep Cherokee that was the lead vehicle in a line of westbound traffic.

As the eastbound pickup approached, Goss maneuvered his patrol car in front of the Jeep Cherokee and angled the passenger side of the car towards the oncoming vehicle. The pickup struck the right rear of the patrol car at about 60 miles per hour.

"Without reservation or regard for his own safety, Tpr. Goss put himself at grave risk to prevent a head-on crash between the pickup and the Jeep Cherokee," Pawlowski said. "Four members of an Erie family were riding in the Jeep. Who can say how many lives were saved by the trooper's action?"

Following the crash, Goss checked on the occupants of the Jeep Cherokee, who were uninjured. He and another trooper then removed the uninjured driver from the pickup, who was charged with driving under the influence, reckless driving and other counts.

Lampel and Tpr. Joseph J. Sepp were among state and municipal officers responding to a pursuit of a suspected drunk driver who fled from a traffic stop in Summerhill Township, Cambria County, on Nov. 9, 2002.

The fleeing vehicle hit a utility pole in Ebensburg and came to a stop as Lampel and Sepp, who was driving, arrived at the scene. Lampel got out of the patrol car and ordered the suspect to show his hands. The suspect exited his vehicle with a gun in each hand and immediately began firing at the troopers. Lampel, Sepp and four municipal officers returned fire. Two of Lampel’s shots hit the suspect.

Sepp was hit by one of the suspect's shots and died the following day. The suspect recovered from his wounds and was convicted of first-degree murder.

"Tpr. Lampel exhibited proper restraint in ordering the suspect to surrender," Pawlowski said. "He then risked injury or death by maintaining his position and returning fire."

Lombardo, who lives with his wife in Pittston, Luzerne County, enlisted in the state police in 2003. He received a Medal of Honor in 2005 for his efforts in attempting to rescue two children trapped in a fire in Monroe County in December 2004.

Goss, of Youngsville, Warren County, enlisted in June 2008. He and his wife have two daughters.

Lampel enlisted in September 1995. He lives in Windber, Somerset County, and has two daughters and a son.

State police have presented 55 Medals of Honor since the award was created in 1970.