An eight-foot-tall puzzle will be constructed Friday, April 20, to celebrate the uniqueness and unity of the St. Bonaventure University community. The Thisness Project, along with the Enough is Enough Campaign, will assemble an eight-foot-tall wooden puzzle at 12:20 p.m. Friday on the lawn near De la Roche Hall. 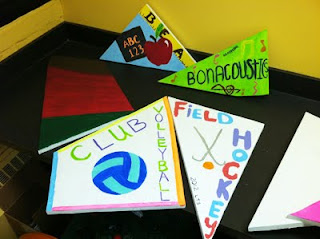 There are 53 pieces of the puzzle — which will spell out SBU — and each puzzle piece was decorated by members of a university club, organization or department on April 16 and 17 at the Merton Center using paint, decals, pictures and any other objects that portray the organization’s uniqueness. Friday’s ceremony will consist of building the puzzle, and comments made by members from various departments and organizations at St. Bonaventure.

“Each of us on campus, in our own uniqueness, forms a greater whole and each of us is important and worthy or respect. This event is tied to our Franciscan heritage and will help to show that we are all God’s creatures and no one should be treated without respect,” said friar Br. Kevin Kriso, O.F.M.

The Thisness Project was initially an anti-bullying campaign but ultimately turned into a project in which the university helps people to understand that everyone is a unique creation and discourages people from harming each other. The term “Thisness” was created in the 13th century by Franciscan philosopher John Duns Scouts, and it means uniqueness or distinctiveness of every person and thing.