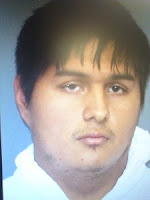 A Steamburg man is hospitalized in serious condition after being shot several times during an argument on the Cattaraugus Indian Reservation in Perrysburg on Sunday.

Mohawk is charged with attempted murder, criminal possession of a weapon and assault. He was sent to Cattaraugus County Jail in lieu of $100,000 cash bail.