Soprano to Perform Program of Wagner

May 16, 2013
By Kimberly Marcott Weinberg
Assistant Director of Communications and Marketing
University of Pittsburgh at Bradford

Stephanie Welge does not want the words “opera” or “Wagner” to scare anyone.

“Opera is all about feeling,” she says, and more familiar than most people think. Welge will share her love of both opera and Wagner in a recital at 7:30 p.m. May 17 in the Bromeley Family Theater in Blaisdell Hall at the University of Pittsburgh at Bradford. The concert is free, and programs will provide synopses and translations of each piece she plans to perform. There will be a short reception afterward. 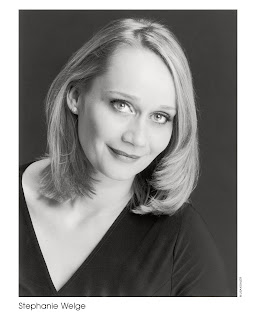 Before George Lucas brought the world of “Star Wars” to the screen, before JRR Tolkien created Middle Earth in “The Lord of the Rings,” Richard Wagner created his own world on so grand a scale that the adjective for such epics became “Wagnerian.”

Bugs Bunny’s “Kill the Wabbit”? Wagner. “Here Comes the Bride”? Wagner. “The Ride of the Valkyries” is familiar to all sports fans.

In October, Welge will have the opportunity to perform for someone intimately familiar with the art of opera, renowned mezzo-soprano Marilyn Horne, who will visit Bradford for the 50th Anniversary Fundraising Gala. The Gala will raise money to fund a rotating exhibition of the Marilyn Horne Archives in the Seneca Building in downtown Bradford. Horne has spent a large part of her retirement nurturing young singers through her foundation, which at one time regularly sponsored opera recitals in Blaisdell Hall.

“I am a big fan of Marilyn Horne,” Welge said. “I just love her voice.” She and her husband also enjoy watching interviews of Horne on popular talk shows like “The Tonight Show” with Johnny Carson.

Welge hopes both the recitals and the museum will make opera accessible to more people in the area, “I think opera is one of the great art forms, and it is meant to touch the soul.”

That’s especially true with Wagner. The “Wesendock Lieder” that Welge will sing during the first portion of her program are “sumptuous,” Welge says. “It’s very romantic music.”

In the second half of her program, Welge will portray Brunhilde from “The Ring Cycle.” Wagnerian opera singers are the marathoners of the opera world who are required to sing for more than four hours at a time in the four operas that make up the cycle. The cycle tells the story of a golden ring that brings the wearer unlimited power. But in the fight for attaining this power at any price, it ultimately leads to the self-destruction of the ring bearer, who has become corrupt in his quest for power. It is Brunhilde, daughter of the mighty Wotan, who, in her mortal love, finally destroys the ring and with it brings balance back into the world.

Welge will sing the climactic scene of the ring cycle when Brunhilde, who, after destroying the ring, follows her lover into death, by riding into the flames of his funeral pyre. The theme of redemption through the love of a woman is a very common theme with Wagner and plays a role in almost all of his operas.

Welge’s childhood was immersed in classical music. Starting at age 5, she sang in the local church choir and soon went on to performing the oratorios of classical church music with the choir until she was 19. She is also trained as a classical pianist. In spite of her musical background she went first into studying theology to become a pastor. After a few years of studying theology, she switched back into music, when, she met her future voice teacher Ariel Bybee on a trip to New York City.

Welge met Bybee through a fellow German student, who was professionally studying voice with the veteran of the Metropolitan Opera. Bybee accepted Welge as a student and immediately recognized her talent. “You will be singing Sieglinde at the Met,” was Bybee’s reaction after hearing Welge.

“Voices are something one is born with,” Welge said. An experienced voice teacher or singer can easily detect a talented voice, even in the early stages of training. After the first lesson with Bybee, Welge knew that she had found her calling. “It just hit me. I knew that this was what I wanted to do,” she said. Welge went on to study with Bybee for seven years, and then started to take on roles in New York, while continuing her studies with conductors at the Metropolitan Opera. She now coaches with Dennis Giauque and Steven Crawford, both conductors at the Metropolitan Opera.

Welge has performed the roles and excerpts of Sieglinde, Elsa, Elizabeth, Venus, Freia, and Gerhilde in New York at the Wagner Theater Festival at Mannes School of Music under conductor David Gilbert. She is also versed in the Italian repertoire and has sung the roles of Tosca with the New York City Opera Ensemble, Desdemona in “Othello” and finally Donna Elvira in “Don Giovanni” and the First Lady in “The Magic Flute” with the Opera Forum in New York City.

Under the direction of Bybee, she has performed Mother Marie in “Dialogues of the Carmelites” and Ellen in “Peter Grimes,” among other roles.

Welge is also making herself a name as a concert artist. Among others, she has sung in concert at The Roosevelt Birthplace and The German Embassy in New York City. She has performed the “Wesendonck Lieder” at Mannes School of Music and performed with the New York City Opera Ensemble at Manhattan School of Music. Her concert appearances also often take her to Germany, where she has performed at a Benefit Gala in Detmold, Germany, in order to raise funds for orphaned children in Romania.