The Bradford Armory on Barbour Street is officially for sale. 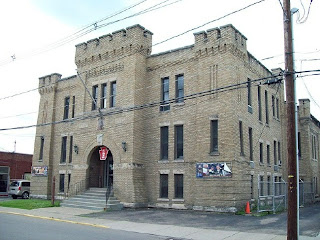 Governor Tom Corbett on Tuesday signed a bill that authorizes the sale of the Bradford facility, as well as the Ridgway Armory, the Ridgway Weekend Training Site and about a dozen other sites throughout the state.

Before last night’s Bradford City Council meeting Mark Austin of the state Department of Military and Veterans Affairs gave a brief presentation about how the sale will work and said they are hoping whoever buys the building will not want to change the outside of the building.

The latest appraisal of the 101-year-old building says fair market value is $63,000. For more information you can go to dmva.state.pa.us or contact Bradford City Hall.

Mayor Tom Riel raised concerns about a potential buyer being able to pay for repairs and renovation, saying he didn't want a repeat of the events surrounding Old City Hall, which had a number of owners who had grand plans, but were not able to follow through.

John Verscharen of the Office of Facilities and Engineering said the bid package does ask about potential buyers' finances.

You can listen to the pubic hearing here.

During the regular meeting council authorized a waiver to allow people to drink beer and/or malt beverages outside The Lighter Side on July 20 for the Kids and Cancer Benefit Motorcycle Run's "After Run Bash."

They also awarded a bid to J & J Emergency Vehicle Sales fro $121,398 for an ambulance. This will be charged to the general obligation bond fund.

June 09, 2010
HARRISBURG -- The Department of Environmental Protection today ordered C.C. Forbes, of Washington, PA, to suspend all post-hydraulic fracturing activities on Marcellus Shale wells in the state immediately as it continues its investigation into a June 3 well blowout in Clearfield County.

DEP Secretary John Hanger said EOG Resources -- the company that owned the well in Lawrence Township -— hired C.C. Forbes as a contractor to provide post-hydrofracturing services at the site.

The company must also furnish the names of its employees who were working at the site or have knowledge of the equipment used there. The secretary said those employees must be made available to the department for questioning.