Staff at the State Police Barracks for non-emergency business may still be contacted by calling 716-665-3114 or 716-679-1520. There will also be an emergency call box located at the front door of the Jamestown and Fredonia Barracks in the event a citizen arrives at the Barracks with an emergency. The call box will ring into the 911 center and the closest available police car will be dispatched. 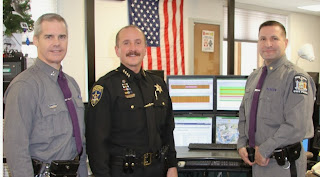 The Chautauqua County Sheriff’s Office currently dispatches sheriff’s patrol, the City of Jamestown Police and Fire Departments, the Ellicott Police, Westfield Police, Lakewood-Busti Police, the Town of Carroll Police and the Chautauqua Institution Police. They also directly dispatch 41 of the county’s 42 fire companies. The Chautauqua County Sheriff’s 911 Center is fully accredited by the New York State Sheriffs’ Association and meets or exceeds all standards as required by New York State. This includes many hours of training for the dispatchers. The Sheriff’s Office Dispatchers are also certified in Emergency Medical Dispatch which gives them the ability to provide pre-arrival medical instructions to those calling 911.

“Our dispatchers have the highest level of training available and our center is in compliance with the most stringent requirements for emergency dispatch set forth by New York State,” said Chautauqua County Sheriff Joseph A. Gerace. “Our 911 Center was the first in the State to have Smart911 available to our residents. Everyone is encouraged to create a public safety profile by visiting www.Smart911.com. This information is automatically presented to the 911 dispatchers when a Smart911 subscriber calls 911 for help. There is no cost to the subscriber for this service. It is completely confidential and has been proven to be life-saving.”

Sheriff Gerace said: “This partnership with the New York State Police is important for the efficiency of dispatching the closest available unit to emergencies and other calls for service and provides for better coordination of resources. It also comes at a time when governments are being asked to reduce expenses and share services. It just makes sense to combine dispatching into one central location where equipment and resources can be dedicated to a single site”.

A full upgrade in radios and towers for public safety communication is currently underway to comply with federal mandates for narrow banding. The grant funded, six million dollar project, contracted to Motorola, will narrow the current bandwidth for police communications to free up addition spectrum for first responders and private industry. The project has a target date of May 2015 for completion.

State Police Captain Edward Kennedy said: “I believe that this consolidation of dispatch services provides the citizens of Chautauqua County with the best in police service and response times while also providing for an increase in the safety of our officers. In addition, this consolidation allows us to reassign Troopers to road patrol functions who would have otherwise been delegated to dispatch and clerical administrative functions. This move should help increase police coverage and response times in the County."