Director of Energy Institute at Pitt-Bradford
Testifies Before Congressional Committee

June 27, 2014
A member of the University of Pittsburgh at Bradford faculty testified Tuesday before a subcommittee of the U.S. House of Representatives Committee on Natural Resources.

He was one of six educators who testified before the subcommittee on energy and mineral resources during a hearing titled “American Energy Jobs: Opportunities for Education.”

The hearing was part of a series being held to explore opportunities related to changes in the production and consumption of American energy. The hearing on Tuesday focused on the skills and education required to fill future energy-related jobs and how community colleges and colleges and universities are working to fill the need for expanded geology, engineering and energy programs. 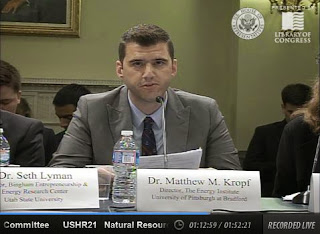 He testified that the first opportunity is basic energy competency at the college level. “There is an inherent need to teach about the complex interplay between energy resources, economics and environmental outcomes in order to create a rational and informed public capable of understanding energy policy.”

Kropf said that to encourage students of all majors to become more well-versed in energy matters, he created a new general education elective, Introduction to Energy Science and Technology, which he began teaching in 2011.

He said that the second educational opportunity is to increase student proficiency in the areas of science, technology, engineering and math (STEM). “Energy production – whether drilling gas wells or installing solar panels – is a multidisciplinary endeavor,” he said. “It is STEM skills that drive innovations in energy production and efficiency, and it is STEM education that will be the only means of achieving and maintaining energy independence for future generations.”

Video of Kropf’s testimony and the full text of his comments are available on the Committee on Natural Resources’ website, www.naturalresources.house.gov. In the video, Kropf’s testimony begins at 1 hour and 9 minutes.

The news leader of the Twin Tiers ... since 1947
Energy Institute pitt-bradford University of Pittsburgh at Bradford