June 19, 2014
WARREN — William J. Wagner, president and CEO of Northwest, and Steven G. Fisher, executive vice president of Banking Services of Northwest, accepted a trophy on behalf of the bank to commemorate the 2014 J.D. Power Award for highest in customer satisfaction in retail banking in the Mid-Atlantic Region.

This is the fourth trophy presented to Northwest in the last five years. The bank received the award in 2010, 2011 and 2012.

Congratulating the crowd, Mr. Fisher said, “I am very proud of our company. This award is a testament to our talented team and our desire to provide quality and value to the customers we serve. Our goal is to continue to push for excellence in consistent, superior service.” 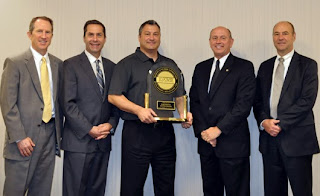 J.D. Power Director of Financial Services Daniel Murphy said, “I’m happy to bring the J.D. Power Award back to its rightful place in Warren, PA. Once again, Northwest proved its commitment to the customer. This award confirms that Northwest is the bank where people make the difference. Your clients feel strongly that your bank has their best interest in mind.”

In addition to this recognition by J.D. Power, Northwest was named to the 2014 “Bank Honor Roll” by Keefe, Bruyette & Woods. The list consists of the thirty-one top performing banks in the country over the last ten years. Northwest was also recently included on Forbes’ 2014 list of “The Top 50 Most Trustworthy Financial Companies in America,” based on the transparency of the bank’s financial reporting and strong governance practices. Finally, Northwest was named to the BeH100 Top 100 Healthiest Workplaces in America.

“We are pleased with the significant recognition Northwest has received in 2014 as it demonstrates our company’s commitment to our customers, employees and strong ethical standards,” said Mr. Wagner. “We thank our employees for their dedication and our customers for their continued support.”

To read the announcement from J.D. Power, please visit http://www.jdpower.com/press-releases/2014-us-retail-banking-satisfaction-study.