Pitt-Bradford Biology Students
Spend Summer Researching to Get Ahead 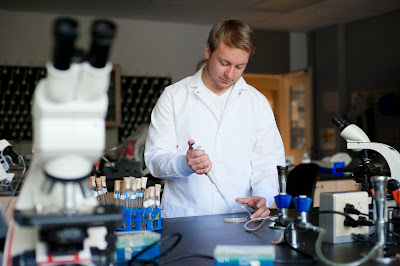 Three biology students at the University of Pittsburgh at Bradford are spending their summer conducting research that they hope will put them ahead for years to come.

Jason Turba, a rising senior from Pleasantville, is working with Dr. Om Singh, associate professor of biology, to examine the antibiotic resistance of bacteria found in chicken feces. While it is not the kind of thing he expects to do in medical school, Turba hopes it’s the kind of thing that can get him into a good medical school, which are increasingly expecting undergraduate students to have conducted research.

“This is a fairly entry-level research project, but this gets techniques down,” he said. Those techniques include not only physical techniques like growing cultures, but also techniques to keep large sets of data organized and accurate. Turba grows separate samples at different temperatures using differing strengths and types of antibiotics. Each variable must be carefully photographed and logged to collect the raw data that will later be analyzed.

Knowing how important research could be for his chances of getting into medical school, Turba said he sought out Singh, who frequently researches with students, always with the goal of publishing the results. Publishing a paper in a scientific journal helps a student rise to the top of an admissions pool for medical or graduate school.

Turba said, “Having the possibility to do undergraduate research in a one-on-one setting like this does allow for a slight advantage for aspiring medical students like myself who are going into a field that is so competitive that it requires students to take advantage of every opportunity, and Pitt-Bradford does provide that opportunity.”

Junior Jonathan Josephs-Spaulding, a biology major with an interest in environmental science from Henryville, is sandwiching this summer’s one-on-one directed research between two larger projects. During the 2013-14 academic year, he worked on writing an environmental assessment using data collected by students last summer in the area of Jake’s Rocks in the Allegheny National Forest.

His work on that project brought him to the attention of Dr. Denise Piechnik, assistant professor of biology. Piechnik is an ecologist who often works with insects as a measure of greater ecological health in an area. This summer, she is mentoring Josephs-Spaulding to study the ecology of soil insects while also using microcontrollers and sensors to collect environmental data. The sensors measure soil conditions that can potentially predict the number and kind of springtails in the soil. Springtails are common tiny insects that are particularly sensitive to moisture.

Arduino microcontrollers, small computers that can be programmed to work with almost any kind of sensor, run the sensors.

“It’s required a lot of development on Jonathan’s part,” Piechnik, said. “He’s had to use a lot of circuitry and code.” Piechnik said she sees a great opportunity for Pitt-Bradford students like Josephs-Spaulding to learn, use and even program this technology themselves by working on her research projects and in her courses.

The two took soil samples from an old-growth forest, an experimental forest and other areas to establish a baseline for future projects.

Josephs-Spaulding is clearly excited by the hands-on opportunities. “My resume has grown so much in recent time,” he said. His experience with the Arduino sensors will come in handy working with a project during the 2014-2015 academic year led by a team of graduate students from Princeton University that is measuring emissions from oil and gas well drilling in the area.

The experiences are not only building Josephs-Spaulding’s resume, but also helping him narrow down what he would like to do after he graduates.

Piechnik said, “When I was an undergraduate, I wasn’t exposed to this type of research.”

Like Josephs-Spaulding, the project Maria Laverde is working on could benefit future students. Laverde, a senior biology major from Bogota, Colombia, is working with Dr. David Merwine, associate professor of biology, to establish a protocol for a future lab.

Laverde is working with ordinary clams, the same kind purchased live with dinner in mind. Only instead of eating them, she’s performing some basic biological experiments on these simple creatures.

Laverde prepares the clams by cutting the muscle that allows them to close, then cutting a thin membrane inside the clam to expose its tiny, three-chamber heart. Then she delicately wraps a thread around the heart to measure pressure from the beating muscle. A machine attached to the thread measures the beats of the heart. She places a filament of silver chloride next the heart to apply electricity, and then measures the clam’s heartbeat as she shocks it. She has found that the more amps the electrical current contains, the slower the clam’s heart beats.

She replicates the experiment with new clams, varying the voltage and frequency of the electrical shock. Laverde’s work follows on that done by previous students to test the effects of various drugs, temperature and pH level on the bivalves.

She hopes that her work in the lab will help her in her quest to attend a graduate program in genetics.

Pictured, Jason Turba, a biology major from Pleasantville, works on a research project at the University of Pittsburgh at Bradford. He hopes that his work studying the antibiotic resistance of bacteria found in chicken feces will give him an edge when applying to medical schools.
Photo by Alan Hancock

The news leader of the Twin Tiers ... since 1947
pitt-bradford University of Pittsburgh at Bradford Warren County