A summertime version of the polar vortex will continue to set record low temperatures in the Plains and Midwest this week. Cool air will also reach into the South and Appalachians.

The air will feel refreshing to some people but downright chilly and autumnlike to others.

According to AccuWeather Meteorologist Steve Travis, "Many residents and visitors will be toting jackets and long sleeves." 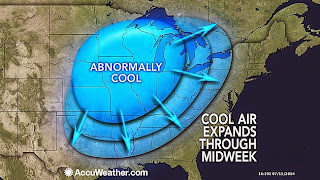 Rather than days of hazy sunshine and high humidity, typical of mid-July, many areas will experience a deep blue sky, at times, low humidity and a cool breeze.

Temperatures failed to climb past the 60s F from the eastern part of the Dakotas, through Minnesota, northern Wisconsin and the Upper Peninsula of Michigan on Monday.

Minneapolis, home of the 2014 Major League Baseball All-Star Game, set a record low maximum temperature of 65 on Monday, breaking the old record of 68 set in 1884.

The polar air will continue to expand southward over the Plains, eastward across the Midwest and will touch the interior South and Appalachians.

High temperatures will range from the upper 60s to the lower 70s at midweek from Minneapolis to Chicago, Milwaukee, Detroit, Indianapolis and Cleveland.

During Wednesday morning, record low temperatures in the books since the 1800s will be challenged at Nashville and Oklahoma City.

Dozens of cities over the Midwest will approach record low temperatures Wednesday and Thursday mornings.

Temperatures will dip well down into the 60s on multiple nights from northern Mississippi to central Alabama, central Georgia and portions of the Carolinas. In some case temperatures will be within a couple of degrees of record lows.

In portions of the central Appalachians, nighttime temperatures will dip into the 40s through into the end of the week or 10 to 20 degrees below average.

Amidst the cool air and spotty showers around the Great Lakes region, there is a risk of a few waterspouts.

According to AccuWeather Senior Meteorologist John Gresiak, "The warmest waters, such as those over lakes Erie, St. Clair and southern Michigan, are most at risk for waterspouts."

As the leading edge of cool air slows and stalls, drenching showers and thunderstorms will occur over portions of Texas, the southern Rockies and southern Plains, as well as parts of Florida and New England at midweek.

The news leader of the Twin Tiers ... since 1947
Accu Weather polar vortex weather