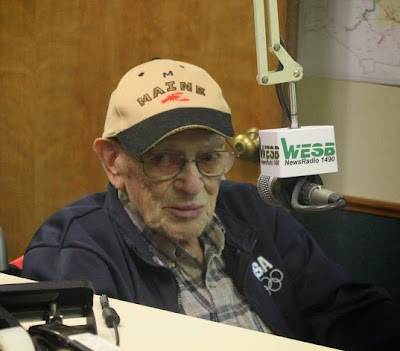 Former WESB News Director/Program Director Bill Winn has passed away. He was 94.

After serving as an intelligence specialist in the 44th Troop Carrier Squadron of the Army Air Force, where he attained the rank of staff sergeant, he worked at radio stations in Williamsport, Batavia, Indiana and Hawaii, before coming to Bradford and WESB.

He retired at age 64, and then volunteered for the American Red Cross for 17 years.

Mr. Winn is survived by his wife, Anna, and a son, David, by his first wife, Shirley, who preceded him in death. He is also survived by family and friends in the Bradford, Rochester and Williamsport areas.

This picture was taken in the WESB newsroom on July 5 by current news director Anne Holliday.