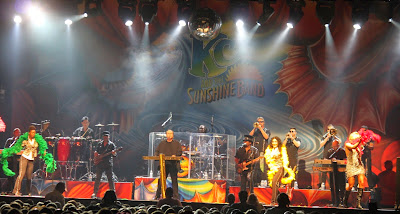 The orange bell-bottomed jump suit is gone, but the moves and the music are the same.

KC and the Sunshine Band turned the Seneca Allegany Event Center into a giant ‘70s dance party Saturday night, playing all the band’s biggest hits, plus covering some other songs from that era – “Brick House” and “Play That Funky Music” to name a couple.

After making sure the crowd had its boogie shoes on, Harry Wayne “KC” Casey made some endearingly self-deprecating jokes about his age (63. Can you believe it?) He then tried to explain to some of the younger people in the audience who he is.

Then he made a couple more jokes about his age and weight, before bringing everything about the aging process into perspective.

“In 40 years,” he said, “Justin Timberlake will look like this.”

The Sunshine Band – minus KC – took center stage a few times, too, with the drummer making an especially big impression.

Disco ball, platform shoes (worn by “party” guests) and some of the most danceable music ever: Enough to take you back to 1977 faster than you can say, “Saturday Night Fever.”