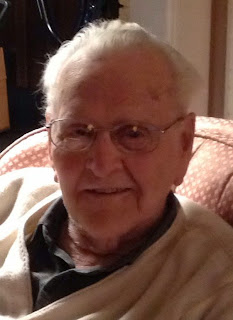 Born on Easter Sunday, April 20, 1924 in Smethport, he was a son of William Hugh and Geneva Belle (Owens) Abbey.

Preston graduated from Port Allegany High School and entered the U.S. Marine Corps where he served on the USS Guam during WW2. Upon returning from the War, he studied architecture at Williamsport Community College for two years. After completion, he did an internship with Raymond Hall Archetects.

Once Preston passed his architectural boards, he decided to move to Bradford with his young family and worked for Earl Wheeler. He later established Abbey, Hemingway and Coatsworth and in 1980 renamed the firm Preston R. Abbey and Associates Inc. He designed numerous banks, schools, churches, and hospitals. Among his accomplishments were the buildings for Zippo, Kendall, Floyd C. Fretz Jr. High School, the Bradford Club, Fisher Price, Little Tykes, and several of the buildings for the University of Pittsburg at Bradford. One cannot help but pass by one of the numerous buildings that Preston designed when driving around his home town.

After retiring in 1988, Preston pursued his love of nature by painting wildlife landscapes. His work was exhibited at several locations in Bradford but he was particularly honored when his entire collection was displayed at the Pitt Bradford Benefit Auction a few years ago.

Preston grew up loving the outdoors. He was an avid fisherman and bird hunter. Depending on the season he kept either his fishing tackle or hunting gear at the ready in his car. Often he would stop on the way to or from business meetings in the area to throw a fly or look for a grouse. He also loved golf and fit in a round whenever he could. His short game was renowned. Always an able athlete, he taught the valuable lesson of losing and winning with grace and dignity. He was a patient teacher to anyone who wanted to learn about his hobbies. He went to great lengths to help everyone. He cared deeply for his community and showed it by giving generously of his time and talents. He was often an anonymous donor to charitable causes.

Preston was a member of The First Presbyterian Church and many clubs and organizations, including: The Pennhills Country Club, The Bradford Club, F&AM Lodge 749, Zem Zem Shrine of Erie and The American Institute of Architects

In addition to his wife of 64 years, he is survived by one son, Paul (Connie) Abbey of Cleveland, OH, and three daughters, Lisa (Steve) Bastedo of Atlanta, GA, Lynne (Jim) Gokey of Cincinnati, OH, and Leslie (Randy) Yokeley of Atlanta, GA. He is also survived by nine grandchildren: Lindsey (Eric) Lane, Kendall Abbey, Palmer Abbey, Dru Bastedo, Wesley Bastedo, Kendra Gokey, Ryan Gokey, Hanna Yokeley, and Maddie Yokeley; a brother, William H. (Barbara) Abbey of Marshburg; a sister; Mary Lou (the late Cy) Dann of Port Allegany and several nieces and nephews. In addition to his parents, he was preceded in death by a sister, June (the late George) Howard.

Friends are invited to call from 3-6 PM, Sunday, July 13, 2014 in the Hollenbeck-Cahill Funeral Homes, Inc., South Avenue. Funeral services will be held at 11 AM, Monday, July 14, 2014 in The First Presbyterian Church, with Rev. Robert Klouw, Co-pastor, officiating. Military honors will be accorded in the sanctuary following the service. Burial will be in Fairview Cemetery in Port Allegany.

The family requests that memorial contributions, if desired can be made to the Preston R. Abbey Scholarship Fund at the University of Pittsburgh at Bradford, 300 Campus Drive or to the charity of the donor’s choice.

Online condolences can be made at www.hollenbeckcahill.com