July 14, 2014
If you’re wearing a Guy Fawkes V for Vendetta mask while walking through backyards and taking your pants off it’s probably a safe bet to say you’re going to be charged with something. 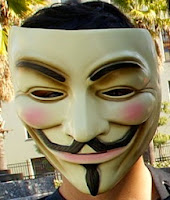 State police say 23-year-old Luke Mattson of Arcade was doing just that on the night of the 4th of July in Yorkshire.

By the time police caught up with Mattson, the mask was hidden in his backpack but, also in the backpack was oxycodone that wasn’t prescribed to him.

He was charged with criminal possession of a controlled substance but police say – quote – There was no evidence he committed any other crimes during his masked travels.

Photo of mask from Wikipedia