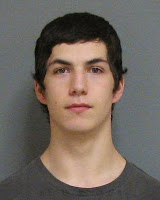 A 20-year-old Jamestown man is accused of shaking and hitting his baby on Thursday.

The six-month-old is in critical condition at Women and Children’s Hospital in Buffalo. Steven Spencer is in Chautauqua County Jail, charged with assault and reckless assault of a child.

While police say Spencer hit the child with an unspecified object, Spencer claims he tripped and fell while he was holding the baby, who was knocked unconscious.