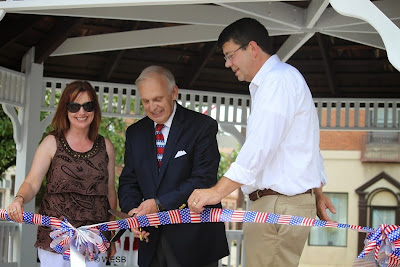 The gazebo in Veterans Square was re-dedicated this afternoon after being repainted and refurbished to look more like the original gazebo that was in the town square more than 135 years ago.

Chamber of Commerce Director Ron Orris spearheaded the project, and Mayor Tom Riel congratulated Orris on yet another job well done. He added that a lot of people could learn from Orris, a shining example of someone who is dedicated to Bradford.

In his remarks, Orris said he wanted to make sure the gazebo was finished for the upcoming Kinzua Walleye Weekend. Later, he decided the days prior to the Fourth of July would be fitting to re-dedicate a structure in a park dedicated to veterans.

After the brief ceremony Orris told WESB that the red-white-and-blue bunting on the gazebo was hand-stitched by workers at Quinn Flags in Hanover, Pa.