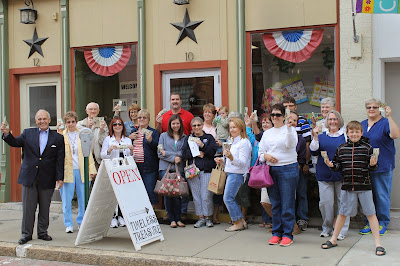 BACC’s next Ca$h Mob Bradford will be held on Saturday, September 20th at 11am. Those interested in joining the mob should bring at least $20 cash to spend at a locally owned business and meet at Veterans’ Square on Main Street. If the cash mob has at least 25 participants (those spending $20 each), then a $25 Bradford Gift Certificate will be awarded to one of the participants. Anyone interested in being added to the Ca$h Mob email reminder list should contact kara.kennedy@bradfordchamber.com. Join the mob – it’s a fun way to support local businesses and put “Shop Local” into action!

Pictured, Saturday’s first Ca$h Mob Bradford targeted Timeless Treasures on Chestnut Street, where the mob generated $701.13 in sales. September’s Ca$h Mob Bradford event is scheduled for Saturday, September 20th at 11am – mobsters should bring their $20 in cash and meet at Veterans’ Square, where the target will be announced.
Chamber of Commerce photo