When Micah Irwin crossed the finish line of Saturday's Willow Creek Triathlon, he was not alone. Actually far from it.

There was the announcement over the PA system, "Welcome to Willow Creek." There were the two lines of veterans clapping and eagerly waiting to shake his hand. And then there was the image of Irwin's grandfather on the front of the 24-year-old's T-shirt.

"I did this in memory of my grandfather (Ralph French) who was a World War II veteran," the Bradford man said. "He passed away a few years ago. Irwin was one of 290 who participated in the ninth annual triathlon that this year raised $40,139 for the transportation funds of the Disabled American Veterans of Mckean and Warren counties. This year's event surpassed last year's donation by more than $10,000. The nine-year total is more than $151,000.

All of the proceeds help local veterans. The funds are earmarked to help with transportation - making sure veterans can get to their doctor's appointments, which are generally in Erie, Buffalo, N.Y., Cleveland or Pittsburgh.

But as Irwin pointed out, helping the veterans is one of the many reasons people do the triathlon, which this year added a duathlon.

"It's great to see everybody help each other out," he said, referring to a woman who saw another struggling and turned around to help even though they were strangers.

But in an event such as this, there are no strangers.

"It's all the encouragement."

That was also one of the things Carolyn Boser Newhouse referred to as a "trifecta" of a great event. 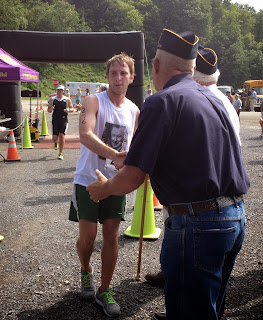 Newhouse, who participated in the team triathlon with her husband, Jim Newhouse, and son, Garrett Newhouse, said the event displays what is great about the area.

"Let's talk about it from a tourism standpoint," said the Bradford woman who is deputy secretary for Innovation and Investment in the state. "This is great for the area. It showcases Pennsylvania's assets. Our community comes together with such hospitality and for a great cause."

These efforts were not lost on those the veterans either.

Guest speaker Walt Simpson, senior vice commander for the state DAV, said the money has put to good use in Warren County.

"We have five vehicles on the ground," he said. "and you don't have to be a disabled veteran, just a veteran."

Warren County ranks rights number one in the state in helping its veterans. "It takes a state (Oklahoma) to beat Chapter 75, but we can't do it without everyone here."

And some who weren't such as George Duke, Chairman of the board for Zippo Manufacturing Co. and W.R. Case & Sons Cutlery, who donates the trophy each year that is given to the top male and female finishers.

Doug Yohe, one of the triathlon's founders, spoke of Duke's generosity.

"Without him and his generosity, this event, this community wouldn't be what they are today."

This year's top finishers, who receive the Thom Maholic Award given in memory of the Bradford man who died in Afghanistan in 2006, were Dan Snyder of Cander, N.C., (1 hour, 8 minutes and 30 seconds) and Melinda Lawson-Crabtree of Frewsburg, N.Y. (1 hour, 15 minutes, 22 seconds).

And while they received a hearty applause, so did the last person to cross the finish line as they were escorted with style by Team RWB from Buffalo, N.Y, who travels to events like this and encourages the last person to finish with words of encouragement and American flags.

"Nobody's left behind. Nobody at all."

All of Saturday's results are posted on www.score-this.com.

Pictured, Micah Irwin is greeted by veterans at the finish line at Saturday's Willow Creek Triathlon that raises more than $40,000 for the Disable American Veterans of McKean and Warren counties.