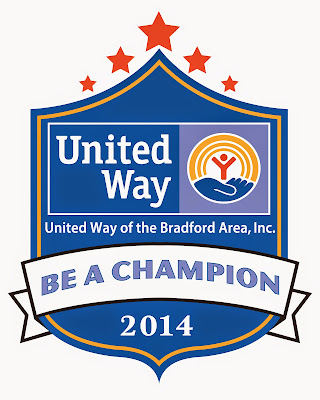 The 2014 United Way campaign begins today, and officials are approaching this appeal aggressively, beginning with a goal of $345,000.

“We’ve increased the goal this year to accommodate the increase in requests from the local agencies to meet the needs of our community,” said Executive Director Mandi Wilton Davis. “We are currently funding the highest number of agencies and programs we’ve ever done with 29 and 51, respectively.

“We’re very confident that this is an attainable goal – although a lot of effort and commitment will be put into it – and we’re looking forward to celebrating with the community at the end of the year,” said Davis.

This year’s promotional theme – “Be A Champion” – is a call to action for donors, but also a fitting tie for the campaign co-chairs, Lisa Minich and Jeannine Schoenecker, who say it (theme) represents their personal passion for giving back to a community they’re proud to call home.

“Our hope this year is to not only reach the monetary goal, but to raise awareness through the community that giving to the Unite Way is still the easiest way to touch the greatest number of lives,” the pair said.

One of the biggest efforts for the start of the campaign is attracting more volunteers through the campaign cabinet. Officials say that there are roughly 30 people who have agreed to participate in fundraising and advocacy efforts over the next four months.

“We’ve got a great group of people who are all committed to our cause, and who are looking forward to seeing the impact of our collaborative efforts,” said Davis. “They are all excellent resources for our organization, but most importantly, they’re all friends!”

The community is encouraged to help celebrate this year’s campaign at the 16th annual pig roast/clam bake, presented by Northwest Savings Bank, which is scheduled for September 4th at the West Branch Community Center. Tickets are $30 per person, and include a buffet dinner, desserts and beverages. A cash bar, 50/50 tickets and raffles are also available. Additional sponsorship has been provided by Tops Supermarket, Penn Laurel Realty and Glenwood Beer Distributors, as well as an in-kind contribution from Bradford City Beers. Proceeds from the event benefit the United Way. Those wishing to attend can reserve their tickets online at www.uwbanews.org or by calling the office.

“As co-chairs of the 2014 campaign, we are committed to leading by example and giving back at the highest level,” said Minich and Schoenecker. “We challenge all community leaders to join us!”