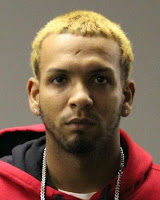 After a car was stopped for having dark tinted windows, a passenger was arrested on drug and weapons charges.

State police stopped the car Tuesday on Route 60 in the Town of Gerry and, while interviewing the driver, noticed an odor of marijuana. They soon learned the passenger, 24-year-old Jose Vazquez Perez of Jamestown had a loaded handgun and 5 grams of marijuana.