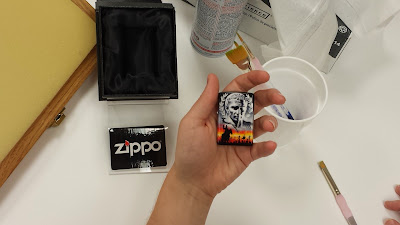 The collection, on display now through August 15, has been loaned to the museum by a special arrangement with a private collector and features six hand-painted, individually numbered Mazzi designs created specifically for the members of Zippo Club Italia.

“The Zippo/Case Museum is honored to have the chance to showcase these beautiful Italian masterpieces,” said Linda Meabon, Zippo/Case Museum Curator and Historian. “I have had the distinct pleasure of watching Maestro Mazzi turn a Zippo lighter case into a unique piece of art. His works are so vividly realistic and dimensional; sometimes it’s hard to believe that it’s not a photograph.”

Mazzi, who lives and works in Modena, Italy, began airbrushing original works of art onto Zippo lighters in 1996, after a chance meeting with the president of Zippo Italia, Zippo’s exclusive distributor in Italy.

His designs caused a sensation in the Zippo collector community, winning first place at the 1996 Zippo Swap Meet Design competition and setting record high bids at the swap meet auction.

At the swap meet in 2000, Mazzi came to Bradford to give live demonstrations, proving that the meticulous work was indeed created with his nimble hand and airbrush tools alone. Mazzi has returned to Bradford on several occasions, in addition to attending international lighter swap meets, and is an avid Zippo collector.

Mazzi has been a highly active member of Zippo Club Italia, an international group for Zippo lighter enthusiasts, since the club’s founding in 2001.

In 2006, Mazzi signed an agreement with Zippo to begin reproducing a few select designs using Zippo’s state of the art color printing process.

The currently available designs include an American flag-draped bald eagle, a pair of wolves in the Arctic, a sailing tall ship on the high seas, and new for this year a black widow spider creeping across a skull, all detailed reproductions of the original Mazzi airbrush designs.

Mazzi, in addition to his Zippo lighter pieces, has also done works for the brands Ducati, Maserati, and Ferrari, as well as British and Saudi Arabia royalty and other heads of state and motorcycle racing stars.

The news leader of the Twin Tiers ... since 1947
Bradford Festa Italiana Zippo