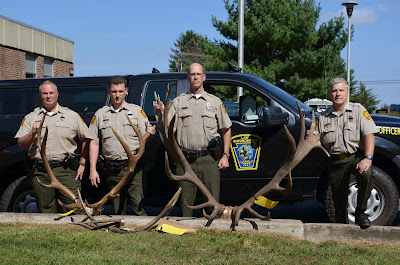 A Bellefonte man has been sentenced to spend up to 18 months in jail and pay more than $20,000 in fines and costs after pleading guilty to poaching three bull elk in Clearfield County, one of them among the largest on record in Pennsylvania.

25-year-old Frank Buchanan Jr. poached the elk during two nights in September. The largest of the three bulls had a 10- by 9-point non-typical rack. If it had been legally taken, it would rank as Pennsylvania’s third-largest bull elk ever.

Two other men charged in the incident waived their preliminary hearings. 46-year-old Jeffrey Bickle, also of Bellefonte, and 20-year-old Cody Lyons of Milesburg are due back in court November 19.