October 10, 2014
The Pennsylvania Game Commission has lifted the temporary prohibition on hunting and trapping within some portions of Pike County that previously were closed due to the ongoing search for a fugitive wanted in the shooting death of a state police trooper.

Game Commission Executive Director R. Matthew Hough today amended the executive order he issued last week, providing for the immediate reopening of all hunting and trapping seasons in all of Lehman Township, and the eastern portions of Blooming Grove and Porter townships, all of which are in Pike County. 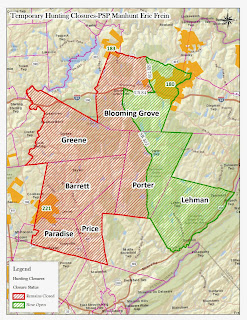 The 250 square inches of fluorescent orange is a combined total of orange material that must be worn on the head, chest and back, and be visible from 360 degrees.

The areas of Pike and Monroe counties that are part of the area initially closed to hunting and trapping all are within Wildlife Management Unit 3D.

In Blooming Grove Township, starting from its northern border of U.S. Route 6, portions east of state Route 739, south of U.S. Route 84 and east of State Route 402 are now open to hunting.

A map of the open and closed portions of these townships is available at the Game Commission’s website.

In the areas where the hunting and trapping seasons have been closed, the seasons will remain closed until the executive order is lifted, which will be announced by the Game Commission in a statewide news release that will be posted on the agency’s website at the time it is issued.

The closure was initiated after the Pennsylvania State Police advised last week that troopers who are part of the search for fugitive Eric Frein had uncovered explosive devices that apparently were left behind in wooded areas by the fugitive, and would pose an obvious danger to anyone who would encounter them.

The Pennsylvania Game and Wildlife Code authorizes the Game Commission to close any hunting or trapping season to assure the purposes of the code, including assuring the health and safety of the persons who hunt or take game and wildlife.

Today’s decision to reopen the seasons was made in consultation with Pennsylvania State Police.

Hough said the ongoing police investigation and search for Frein has provided no indication it is unsafe for hunting activity to resume in the previously closed area that was reopened today. Still, he urged hunters in the area to remain cautious and to report any suspicious activity to police.

“While the area that has been reopened is separate from the active search area, we want our hunters and trappers to be safe and alert, and if they see any activity that strikes them as suspicious, we need them to report it immediately,” Hough said.

Frein is wanted in the Sept. 12 ambush-shooting death of Pennsylvania State Police Cpl. Bryon Dickson II outside the state police barracks in Blooming Grove, Pike County. Trooper Alex Douglass was wounded in the attack. The search for Frein has continued since, with the active search area located in Monroe County.

Anyone who witnesses suspicious activity or discovers possible evidence related to Frein or this investigation is urged to call the Pennsylvania State Police TIP Line at 1-866-326-7256.