A double major in history and journalism and mass communication, Pinter is one of five winners of the foundation’s annual nationwide essay contest among students from 28 other invited universities with strong journalism programs. Each of the winners receives a $5,000 scholarship in honor of the late sportswriter Jim Murray.

Pinter attended the congratulatory ceremony for the 2014 Murray Scholars at the Santa Anita Racetrack in California on Oct. 25. 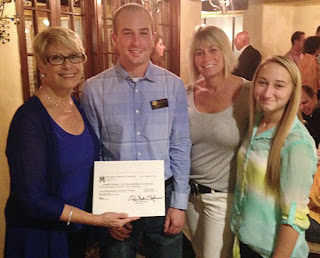 Pinter, originally from Angola, N.Y., and a graduate of Lake Shore Senior High School, came to St. Bonaventure with a passion for his hometown teams, the Buffalo Bills and the Buffalo Sabres.

As a writer for the school’s student-created online newspaper, The Intrepid, he has the itch for sports writing. Having written a story on the 2013 winner of the scholarship, Emily Steves, he decided it was his year to win the scholarship.

After reading the criteria, “writing a feature story on a person or event that influenced your school’s sports history,” he had an idea.

Bill Swan, a 1969 graduate of St. Bonaventure and chair of the Board of Trustees during the university’s 2003 NCAA basketball scandal, had inspired Pinter to find the positive in a negative, well-known situation.

Pinter began his research on Swan, who was the Brown Indian mascot, and discovered personal stories about the revered alumnus. The essay shifted focus as he took a closer look at Swan’s role as board chairman during the scandal. He didn’t want Swan’s memory to be a negative one despite criticism Swan experienced in some media and alumni circles.

Pinter’s essay was the top pick of the judges, earning the most points of all the winning entries.

Pinter is proud to represent St. Bonaventure amongst the other winners.

“The little school of Bonaventure competes with Syracuse, University of Kansas and other schools with large numbers. It was just awesome to see us on that list,” he said.