October 09, 2014
Was L. Frank Baum, the author of “The Wonderful Wizard of Oz,” a Bradfordian? Did Bradford’s oil boom of the 1870s and ‘80s inspire Baum’s vivid imagination? Many people think so.

One Pitt-Bradford professor claims to have the answers and will share them in a presentation titled “Case Closed: L. Frank Baum in Bradford,” at 7 p.m. Oct. 28 in the Mukaiyama University Room of the Frame-Westerberg Commons. The event is sponsored by Pitt-Bradford’s Friends of Hanley Library and is free. 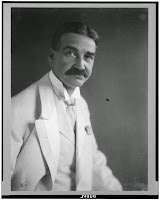 For decades, scores of Bradfordians have debated whether Baum lived and worked in their northwestern Pennsylvania town before he published his iconic work. Some speculate that he wrote for -- even founded – The Bradford Era.

But was Baum really in Bradford circa 1879, starting or writing for a newspaper, before he went on to produce America’s greatest fairy tale?

Tim Ziaukas, professor of public relations, claims to have tracked down the evidence. He published his results this summer in Western Pennsylvania History in an article titled “Oz in the Oilfields? Searching for L. Frank Baum in Bradford.”

Ziaukas is director of the public relations program and teaches courses in PR, journalism, communications and popular culture. His scholarly work has appeared in the Journal of Public Relations Research, Public Relations Quarterly and American Journalism: A Journal of Media History, among other publications. In addition to teaching at Pitt-Bradford, he serves as marketing consultant for the Bradford Creative and Performing Arts Center.

The news leader of the Twin Tiers ... since 1947
Bradford Bradford Era L Frank Baum pitt-bradford The Wizard of Oz Tim Ziaukas University of Pittsburgh at Bradford