October 22, 2014
A theatrical production based on Harper Lee’s Pulitzer Prize-winning novel, “To Kill a Mockingbird,” comes to the University of Pittsburgh at Bradford Oct. 29.

The National Players, the nation’s oldest professional touring group, will present the play at 7:30 p.m. at the Bromeley Family Theater in Blaisdell Hall. Admission is $16 to $20 for the public, $12 to $16 to Pitt-Bradford faculty and staff, and $5 for students. 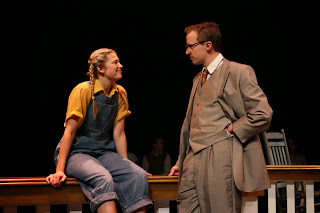 Shirley Serotsky will direct alongside Jason King Jones as the artistic director for the National Players as part of the Players’ 60th anniversary season.

In his director’s note Jones writes that “To Kill a Mockingbird” brings to light a critical moment in our nation’s history when racial hatred and injustice were prominent.

Written in 1960, “To Kill a Mockingbird” is an iconic coming-of-age story about a young girl named Scout. In the heroics of her father, the struggles of her friends and neighbors and the thread of a boogeyman, Scout lives through the joys and childhood innocence and the pains of growing up.

The novel is presumed to be autobiographical, because Scout shares many similarities with Lee, including having a lawyer father, a dislike for racial prejudice, and origins in small-town Alabama.

“To Kill a Mockingbird” is Lee’s only published novel and was on The New York Times’ best seller list for 98 weeks, translated into 18 different languages and has more than 30 million copies sold.

The 1962 movie based on the book was nominated for an Oscar for Best Picture and earned Best Actor for Gregory Peck, who played the part of Scout’s heroic father, Atticus Finch.

The American Library Association says that “To Kill a Mockingbird” is one of the most-often banned books in school libraries, even while it is required reading in many other schools. On the morning of Oct. 29, the play will be presented to area students in grades 8 through 12.

Tickets are available by calling the Bromeley Family Theater Box Office at (814) 362-5113. The show will run 90 minutes with a 15-minute intermission. For more information on the show, visit www.nationalplayers.org.

For disability-related needs, contact the Office of Disability Resources and Services at (814) 362-7609 or clh71@pitt.edu