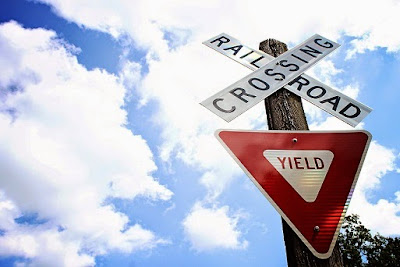 2015 calendars are now available at all CNB Bank branch offices and the public is invited to stop in to pick up their free copy.

On Wednesday, August 6, 2014, twelve winners, including a Best of Show, and twenty-four honorable mentions were selected to be featured in the 2015 CNB Bank wall calendars. Local residents, whether beginner, amateur or professional photographers, were encouraged to submit one or two of their photos via the Bank’s web site at www.BankCNB.com June 16 through August 1, 2014.

The 2015 calendar features local photos with a railroad theme. Nearly two hundred entries were received, but one stood out as Judge’s Best of Show, which was submitted by Elizabeth Behan of Bradford. Her photo, entitled “Railroad Crossing”, will be featured on the cover of the 2015 wall calendars, as well as inside the calendar for the month of April. The other eleven months of the year will feature photographs submitted by James Olmstead of New Florence, Renee Shimel Hall of Morrisdale, Cathie Ensminger and Carolyn Smeal of Clearfield, Chris Lasher of Brookville, Kevin Mills of Huntingdon, Erika Patrick of Munson, Nancy Pascarella of Bradford, Joshua Sykes of Woodland, R. Thomas Berner of Bellefonte, and Terry Werneth of Meadville.

CNB initiated this contest to provide an avenue to feature local talent and the communities in which the Bank serves through the eyes of residents as they’ve captured with their camera and continued due to its success.

The theme for the next CNB Bank wall calendar photography contest will be announced in June, 2015.

The news leader of the Twin Tiers ... since 1947
Bradford CNB