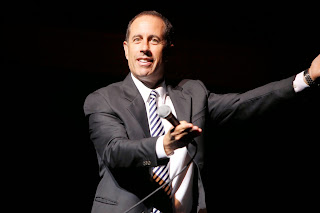 Jerry Seinfeld,will be performing his signature stand-up routine during the 2015 Lucille Ball Comedy Festival on Saturday, August 1, 2015 at the Jamestown Savings Bank Arena. Seinfeld has been hailed for his uncanny ability to joke about the little things in life that relate to audiences everywhere. Seinfeld now sets his sights on performing both nationally and internationally in 2015.

His tour will visit the Jamestown Savings Bank Arena for two performances on August 1 at 7pm & 9:30pm. These shows are on sale Monday, February 9 at 10am. Members of the Lucille Ball Desi Arnaz Museum & Center for Comedy will be able to participate in an exclusive pre-sale period beginning Monday, February 2 at 10am.

“Jamestown celebrates the best in comedy, and Jerry Seinfeld is exactly that,” said Journey Gunderson, festival producer and executive director of the Lucy Desi Center for Comedy and National Comedy Center.

Photo provided by the Lucy-Desi Center for Comedy