November 03, 2014
LEWISTON, NY – U.S. Customs and Border Protection agriculture specialists working at the Lewiston Bridge discovered live Khapra Beetle larvae, one of the world’s most destructive insect pests, inside a shipment of rain ponchos from China.

On October 28, 2014 an ocean container being hauled by a commercial tractor arrived at the Lewiston Bridge and was referred for further examination. During a physical inspection of the commodity, CBP agriculture specialists discovered three live insect larvae. The container was sealed and the pest was forwarded to USDA for identification.

“Intercepting Khapra Beetle is vital to the agriculture industry, said Randy Howe, Director of Field Operations for the CBP Buffalo Field Office. “In this case, it isn’t common for Khapra Beetle to be discovered within this type of commodity. The vigilance of the agriculture specialists was extraordinary and stopped a potentially destructive insect from entering.”

Khapra Beetle poses a high risk to U.S. agriculture and is one of the world’s most destructive insect pests of grains, cereals and stored foods. Known as the ‘dirty feeder,’ it damages more grain than it consumes because it contaminates grain with body parts and hairs. These contaminants may cause gastrointestinal irritation in adults and especially sickens infants. Khapra Beetles have the ability to tolerate insecticides and fumigants, and can survive for long periods without food.

According to the APHIS, previous infestations of Khapra Beetle have resulted in massive, long-term control and eradication efforts at great cost to the American taxpayer.

California implemented extensive eradication measures following a Khapra Beetle infestation discovered there in 1953. The effort was deemed successful, but at a cost of approximately $11 million. Calculated in today’s dollars, that would be about $90 million.

Khapra Beetle is the only insect in which CBP takes regulatory action against when found dead or alive.

Agriculture specialists protect the U.S. from the threat of invasive plant pests and foreign animal diseases with inspection and prevention efforts designed to keep prohibited agricultural items from entering the U.S. These items, whether in commercial cargo or with a person entering the country, could cause serious damage to America’s crops, livestock, environment and potentially public health.

CBP Agriculture specialists have extensive training and experience in the biological sciences and agriculture inspection. Please visit http://www.cbp.gov/border-security/protecting-agriculture for more information about CBP’s mission to protect the nation’s agriculture industry. 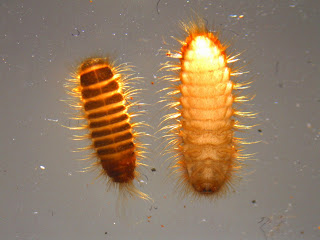