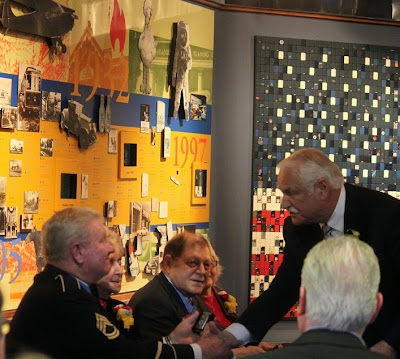 Medal of Honor recipients Lt. Col. Hal Fritz and Sgt. Sammy Davis were at the Zippo/Case Museum this afternoon to install a prototype of the commemorative Medal of Honor Zippo lighter Case knife set. And, in case you were wondering Davis -- who is known as "the real Forrest Gump" -- was wounded in the same place the fictional character was -- "In the buttocks, sir."

In his speech, Fritz said after meeting Zippo and Case employees, as well as many people from the Bradford area, he believes the companies and the community represent "the spirit and core of America."

You can see more pictures on our Facebook page facebook.com/1490wesb.

Anonymous said…
I'll be the first to thank all the veterans who fought for our country and fought for our freedoms! Too bad they all died many, many decades ago!

What we have today are hired mercenaries and in some cases cold blooded killers who sign up because they like killing people. And the usual criminals who by the urging of a judge chooses to "sign up" instead of going to jail. And some people call them all "heroes". That really takes away from the real war heroes who truly did fight for our freedoms.

See some of the facebook pages for the shameless fools "cashing in" on the "Veterans Day" hoopla.

I would also ad that if you voted Republican, you voted AGAINST our veterans, their families and their needs.