SBU Sophomores A Cut Above

The Goin’ Bald for Bucks event Oct. 18 raised nearly $10,000 for cancer research and support —almost twice as much as any college in the region has ever raised. 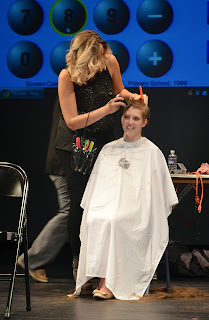 “It was just amazing to see the students’ passion for the event,” said Leah Shearer Noonan, SBU class of 2000 and program coordinator with the Teens Living with Cancer program, one of the three organizations to benefit from the fundraiser. Buffalo’s Roswell Park and Rochester’s Wilmot Cancer Institute were the other beneficiaries.

Sophomore class co-adviser Robbie Chulick, ’13, said 70 members of the Bonaventure community had their hair cut, with 15 — including freshman Sara Bermingham — being shaved bald.

Local hair stylists from JCPenney, Hall of Fame Barbershop and A Jason Clemons Salon donated their time and skills, with hair from 15 students being donated to Locks of Love, an organization that provides hairpieces to financially disadvantaged children.

“Seeing SBU rally behind a worthwhile cause was amazing,” said James “JW” Cook, sophomore class president and a political science major from Brockport. “SBU is a close-knit community and events like this continue to prove that.”

Noonan was effusive in her praise of the students’ efforts.

“I thought it was remarkable. I think that passion comes from being personally touched by cancer in some way. So many students have had a connection to someone who’s gone through it,” said Noonan, who’s been more than touched by cancer. She’s battled it twice.

Enduring chronic fatigue syndrome throughout her St. Bonaventure career, Noonan was diagnosed “very late in the game” with thyroid cancer when she was 26.

“Luckily, it’s a very survivable cancer, so I beat that,” she said. Four years later, she beat Hodgkin’s lymphoma into remission, too.

Noonan’s experience inspired her to work with young adults coping with cancer. She’s been working since 2008 for Teens Living with Cancer, a project of Melissa’s Living Legacy Teen Cancer Foundation.

The Goin’ Bald for Bucks fundraiser began in Western New York when a cancer patient’s brother vowed to keep his head shaved until his sister’s hair grew back.

Ten years after it began, more than $2.4 million has been raised through Goin’ Bald for Bucks, with more than 70 schools and organizations across New York state participating.

The program is based at Roswell Park, which last year allowed Wilmot Institute and Teens Living with Cancer to expand the fundraiser into the Rochester market.

Pictured, Freshman Sara Bermingham gets her head shaved by Jana from A Jason Clemons Salon in Olean.