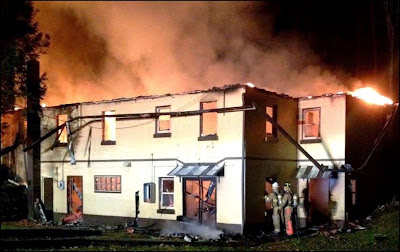 The Lakeview Motel in Sinnemahoning was heavily damaged by fire early this morning.

The fire was reported at about 2:45 a.m. and volunteers from Sinnemahoning, Emporium, Coudersport and Austin were on the scene for about four hours.

Although the roof caved in, most of the damage was confined to the hotel area and not the storefront.

When they got this call, firefighters had just gotten back from battling a blaze in Coudersport that did $175,000 worth of damage to a house on Crandall Street. Coudersport fire Chief Bryan Phelps says the house is a total loss and very little personal property could be salvaged.

A state police fire marshal was called in to investigate, and could not determine a cause.