December 19, 2014
Students in the University of Pittsburgh at Bradford’s associate of science in nursing program scored a 90 percent pass rate on the national nursing exam – eight points higher than the national average. 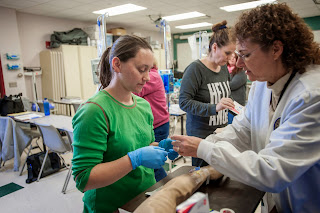 The Pitt-Bradford pass rate on the National Council Licensure Exam – or NCLEX, as it is commonly referred to – was also seven percentage points higher than the pass rate at other programs in Pennsylvania.

Most programs have seen a decline in scores this year, explained Dr. Tammy Haley, associate professor of nursing and director of the nursing program, because the test is changed every three years. This was the first year for students to take the new test, but Pitt-Bradford students continued to outperform state and national averages.

For the previous three years, Pitt-Bradford students averaged a pass rate of 98 percent compared to a national average of 87 percent.

“We’ve done a good job preparing our students and helping to maintain a high pass rate,” Haley said. “But it is truly the success of the students, who have done the hard work.”

Nursing is one of the most popular majors at Pitt-Bradford, which offers a 2-year ASN leading to the NCLEX and a four-year BSN degree.

Many of Pitt-Bradford’s nursing graduates have stayed in the area to work at health care facilities in the region, according to figures from the Economic and Community Impact Survey conducted by officials from the Center for Social and Urban Research at the University of Pittsburgh. From December 2000 to August 2010, 548 Pitt-Bradford nursing graduates were employed in the six-county region of Cameron, Elk, McKean, Potter and Warren counties in Pennsylvania, and Cattaraugus County, in New York. Additionally, of the total number of nurses employed in the region, 55.6 percent were Pitt-Bradford graduates.

Pictured, Martha Dibble, instructor of nursing at the University of Pittsburgh at Bradford, right, works with a student during a lab.
Pitt-Bradford photo