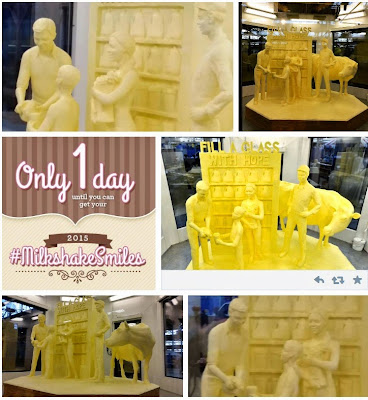 The butter sculpture for the 2015 Pennsylvania has been unveiled.

The sculpture, called “Fill a Glass with Hope,” shows a food bank worker pouring milk into a glass held by a little boy next to his mother. A dairy farmer and cow stand close by, next to a case filled with gallons of milk.

This year, the Farm Show will be collecting milk – and money – to provide milk to food banks. Milk is the most needed, but least donated item at food banks.

This year's sculpture took sculptors Jim Victor and Marie Pelton of Conshohocken 10 days to complete. After the farm show, the 1,000 pounds of butter will be taken to a local farm, where it will be converted into energy.

The Farm Show starts Saturday in Harrisburg, and runs through January 17.