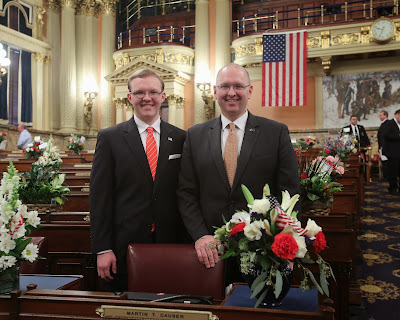 HARRISBURG – Rep. Martin Causer (R-Turtlepoint) was sworn in to his seventh term of office on Tuesday at the state Capitol.

His priorities for the 2015-16 legislative session include fighting back against overregulation of the state’s conventional oil and gas industry; ensuring fair compensation for state-owned lands in the region; and adopting an on-time, fiscally responsible budget.

“These priorities each play a vital role in the future economic health of our region,” Causer said. “Rural Pennsylvania faces unique challenges that are often not understood by members in the urban and suburban regions of the state. I take very seriously my responsibility to ensure the voice of rural Pennsylvania, and specifically the voice of McKean, Potter and Cameron counties, is heard.

“One of the biggest challenges facing our region is the outright attack by regulators on our conventional oil and gas producers. I have been fighting, and will continue to fight, to ensure the survival of this 150-year-old industry that employs thousands of people and contributes so significantly to our local economy.”

In 2014, Causer led the effort in the state House to adopt legislation, now law, which requires the state’s Environmental Quality Board (EQB) to develop separate regulations for the conventional and unconventional oil and gas industries to help ensure the regulations are both reasonable and relevant to each type of activity.

“Many of the regulatory challenges faced by conventional producers were the result of laws adopted to address unconventional drilling in the Marcellus shale. Much of what is necessary for deep well drilling is completely unnecessary for shallow wells,” Causer said. “This law should help address those issues, but I realize there is more work to be done to ensure regulators aren’t driving these small, independent employers out of business.”

Another significant contributor to the region’s economic challenges is the vast amounts of state-owned land. Causer will again introduce two bills aimed at ensuring the region gets its “fair share” of compensation from the state.

One will increase the state’s payment in lieu of taxes (PILT) on state-owned forest and game lands from $3.60 per acre to $6 per acre. The PILT is divided equally among the municipalities, school districts and counties and applies to lands under the control of the Department of Conservation and Natural Resources (DCNR), the Pennsylvania Game Commission (PGC) and the Pennsylvania Fish and Boat Commission (PFBC). Records show Cameron, Potter and McKean counties collectively are home to more than 475,000 acres of state-owned land. In fact, in Cameron County, more than half of the land is owned by the state.

The other bill would call for 20 percent of total revenue collected from the sale of timber, oil and natural gas on most state-owned lands to be deposited into a restricted fund for disbursement to local governments across the Commonwealth, proportionally based on the number of aces of state land in each municipality, school district and county.

“When the state owns the land, it is a real burden on local governments and taxpayers,” Causer said. “The PILT was last increased in 2006; it’s time for the state to step up and compensate our communities fairly.

“And it only seems fair that our communities also should benefit from the sale of timber, oil and gas on our state-owned lands,” he added.

Finally, Causer hopes to adopt a fiscally responsible budget that is not overly burdensome to the state’s taxpayers.

“The last four budget years have been very challenging, but we have been able to craft plans that fund key services, such as education and health care, without increasing taxes,” Causer said. “The economy is improving but the state’s fiscal condition is still very poor. It appears this year could be the tightest and most challenging budget yet.”

Gov.-elect Tom Wolf will unveil is 2015-16 state budget proposal before a joint session of the General Assembly in March. The House and Senate will then conduct in-depth hearings on the proposal before adopting a final spending plan. The fiscal year ends on June 30. 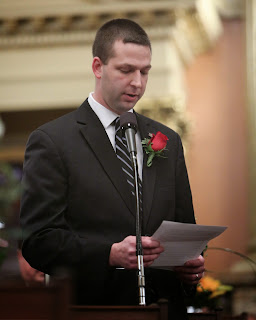 State Rep. Matt Gabler (R-Clearfield/Elk) was also among members of the state House to be officially sworn into office Tuesday to serve in the General Assembly for the 2015-16 session.

“Taking the oath of office to represent the residents of the 75th District is a great honor,” Gabler said. “I am humbled by the trust placed in me by those who send me to Harrisburg and I embrace the responsibilities associated with serving as their voice in the General Assembly.”

Gabler’s role in state government is expanding as he has been appointed to serve as deputy chairman of the House Majority Policy Committee.

“I’m looking forward to working with Policy Chairman Kerry Benninghoff (R-Centre/Mifflin), who I know very well from my first three terms in office,” added Gabler. “Working on this committee will allow me to further investigate major issues facing Pennsylvania and work with fellow committee members to formulate solutions for the betterment of the Commonwealth.”

The Policy Committee conducts hearings and roundtable discussions across the state about important issues to gather testimony and information from key stakeholders. Gabler will attend these hearings and work with his colleagues in the House Republican Caucus to develop policies to address those issues.

The 75th District consists of all of Elk County, as well as, in Clearfield County, the City of DuBois; the townships of Bloom, Bradford, Brady, Covington, Girard, Goshen, Graham, Huston, Karthaus, Lawrence (the Plympton precinct), Pine, Sandy and Union; and the borough of Falls Creek.

Rep. Kathy Rapp (R-Warren, Forest & McKean) said she is proud to have been reelected to represent the 65th legislative district and is eager to discover what kind of working relationship can be forged between lawmakers and the new administration.

“It’s a very humbling feeling to know that the people of the 65th district entrusted me to represent them here in Harrisburg. And I’m waiting to hear after the Governor is inaugurated, what his plans are for the people of Pennsylvania. And hopefully we can have a good working relationship, but time will tell on that," she said. 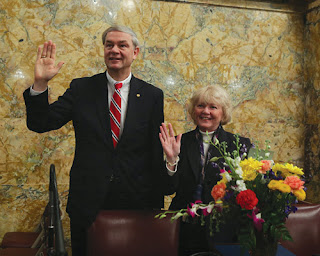 State Rep. Matt Baker (R-Bradford/Tioga) also took the oath of the office as a Pennsylvania state representative for the 12th time. For the 2015-16 term he will be representing all of Tioga County, as well as parts of Bradford and Potter counties.

“It continues to be my pleasure to work on behalf of the people of the 68th Legislative District who have kindly elected me to be their voice in Harrisburg,” said Baker. “As we start yet another legislative session, I will continue to work for the betterment of those living and working in the Northern Tier, which means supporting more job creation opportunities, improving access to health care and ensuring all students receive a quality education.”

Baker has also again been appointed to serve as chairman of the House Health Committee.

“I am pleased that through the committee I was able to advance so many important health care bills that were passed into law this past session, including legislation to create a prescription drug monitoring program, increase genetic disease screening for newborns, create a Lyme disease task force and develop a Patient-Centered Medical Home Advisory Council for the state’s Medicaid program to improve care and reduce health care costs, said Baker. “I am looking forward to working on many more legislative measures aimed at improving access to and quality of health care in Pennsylvania.”