January 30, 2015
Fresh from a performance at Carnegie Hall in honor of Marilyn Horne’s 81st birthday, American bass DeAndre Simmons will return to the University of Pittsburgh at Bradford Feb. 6 for a recital in Bromeley Family Theater.

Tickets for the concert, which will begin at 8 p.m., are $12 and $16 for the public and $5 for all students. Included in the ticket price is a Valentine’s Day-themed pre-show reception that will begin at 6:30 p.m. and feature hors d’oeuvres and chocolates. 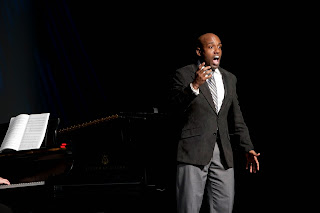 Simmons last sang at Pitt-Bradford’s 50th anniversary gala in 2013, when he wowed the audience with his velvety voice and captivating stage presence. A frequent recitalist, he has performed at Carnegie Hall, with the Music Academy of the West orchestra and for opera “Cyrano” with the Opera Company of Philadelphia.

Simmons will sing classical selections by Johannes Brahms and Richard Strauss as well as “Shadow of the Blues” by John Musto and songs by Irving Berlin, Harold Arlen and Stephen Sondheim.

He is a graduate of The Curtis Institute of Music in Philadelphia.

Simmons will be accompanied by Brent Funderburk, whose recent appearances include recitals at Weill Hall, Alice Tully Hall, Merkin Hall, Symphony Space and the Krannert Performing Arts Center, as well as performances with singers as part of Marilyn Horne’s The Song Continues program at Carnegie Hall.

For more information or tickets, contact the Bromeley Family Theater Box Office at 814-362-5113 or showtix@pitt.edu.

For disability-related needs for the event, contact the Office of Disabilities Resources and Services at 814-362-7609 or clh71@pitt.edu.