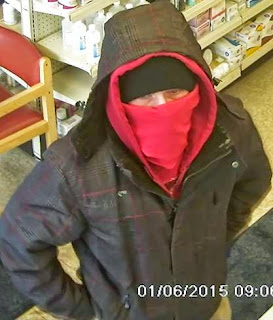 Olean Police have release a surveillance camera image of the man who robbed the Dan Horn Pharmacy Tuesday morning.

The white man is 18 to 28 years old. He walked into the Greene Street store at just after 9 a.m. and handed the clerk a note demanding Suboxone. After the clerk gave him the drug, he left the store on foot headed toward the intersection of East Greene and South Barry streets.

He did not display a weapon.

Anyone with information on this incident is asked to contact Olean Police.