CASA of McKean County at 80% of Goal 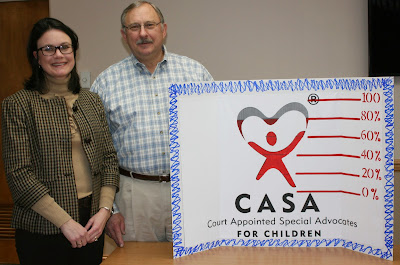 CASA of McKean County Executive Director Kristen Tim and Board President Bob Esch show that the organization has reached 80 percent of its $150,000 goal so far. The funds have come from private and corporate donations, as well as a grant from the United Way of the Bradford Area. The money will be used for the next three years to operate the program, which provides much-needed stability and support for neglected and abused children in McKean County. To make a tax-deductible contribution to the campaign, contact Tim at 887-4020 or casa@mckeancountypa.org or visit CASA’s website at www.mckeancountypa.org/casa.aspx.