February 05, 2015
The University of Pittsburgh is creating the Live Like Lou Center for ALS Research to study a cure for ALS, the degenerative nerve disease named for baseball player Lou Gehrig.

The center is named after a charity founded by Neil and Suzanne Alexander, a Pittsburgh couple who started the fund at The Pittsburgh Foundation after Neil Alexander was diagnosed with ALS three years ago. 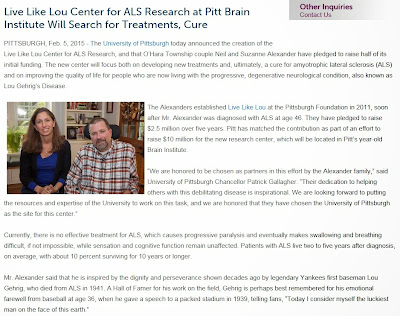 The news leader of the Twin Tiers ... since 1947
ALS Lou Gehrig's Disease University of Pittsburgh UPMC